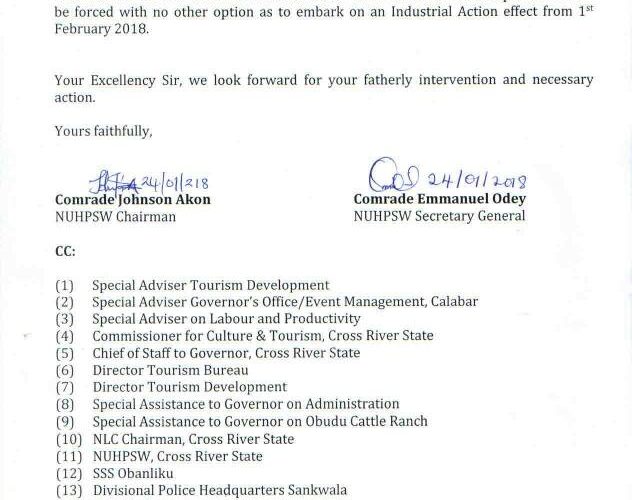 Members of the Obudu Mountain Resort branch of the National Union of Hotels and Personnel Service Workers have again written Cross River Governor, Senator Ben Ayade to intervene in the issues concerning their owed allowances and several others.

This was contained in a letter dated January 24, 2018 and signed by the Chairman, Comrade Johnson Akon and the Secretary, Comrade Emmanuel Odey which called on Mr. Ayade to intervene or the union will proceed on a strike with effect from February 1, 2018.

The letter titled: “RE: Seven (7) Days Notice Of Strike Action To Resolve A ‘Bargaining Impasse’ At Obudu Mountain Resort” said following a letter with a similar title dated November 30, 2017, the representatives of the state have failed to come to a logical conclusion with the union over outstanding issues.

The letter added that: “Sir, we wish to bring to your notice that the staff of Obudu Mountain Resort have resolved that if these issues are not resolved within the above stated period we will be forced with no other option than to embark on an industrial action effective from 1st February 2018.”

The union had embarked on an industrial action in December which cane six months after another one in June last year. The strike came after the elapse of the ultimatum given to the state after the advisor to Mr. Ayade on Ranch matters, Ability Akwaji was also chased out of the resort staff.

The strike in December forced the Miss Africa beauty pageant to cancel its planned week long stay at the ranch resort and camped instead at the Tinapa lakeside resort. Mr. Ayade was also forced to sleep at his privately owned Mega Hilton hotel in Obudu due to the strike.

The union also called on Mr. Ayade to look into the total overhauling and restructuring of the Ranch as “most facilities are dilapidated and thus providing poor service delivery to our esteemed guests”