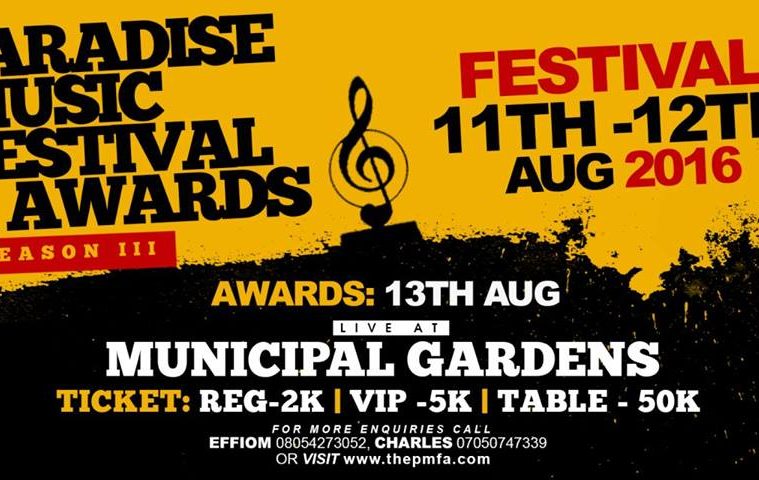 PARADISE MUSIC FESTIVAL AND AWARDS SETS FOR SEASON 3 IN CALABAR

The much awaited Season 3 of Paradise Music Festival & Awards; one of the biggest events in the city Calabar, is set to happen from August 11 – 13, 2016.

This year’s event will be a three-day nonstop fun with the best of home-grown artistes performing alongside A- list names.

According to Effiom Trombone, the event director, “The musical show has been running for two years now and this will be the third year. We have been doing it low keyed in the last two years, but we discovered that many talents abound especially in Calabar. The only platform they have to show the world their talent is the Calabar Christmas Carnival, which takes place once a year. So, we decided to create an alternative hence this event.” The show, which starts August 11, will feature a music festival for the first two days and the third day will be the awards itself.  Prof. Ben Ayade, Governor of Cross River State is expected to grace the occasion among other dignitaries.

Award winning music producer/song writer, Cobhams Asuquo will be given a Lifetime Achievement Award for his contribution to the music industry in Nigeria. Artistes expected to perform at the festival include: home boy Iyanya, Kelly Handsome, Tossy Young and many more.