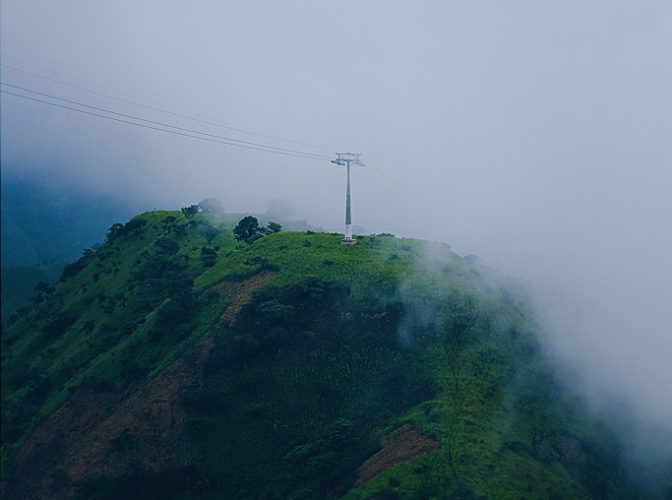 Processed with VSCOcam with hb1 preset

I am not going to try and wax poetic on my experience at the Obudu Mountain Resort. This could end up becoming a long read and I would rather you just go to the resort and experience it for yourself.I had been looking for somewhere to take a road trip to in Nigeria and the Obudu Mountain Resort seemed like the perfect choice. After deciding on Obudu, deciding how to get there proved more problematic than I had originally envisaged when I made the choice

I asked anyone I knew who had a connection to Cross River State and the best option I got back was that I would need to take a bus to Ogoja and then another bus to Obudu. Everyone known by the people I know seemed to drive down to Obudu themselves. Since I stay in Port Harcourt, it looked like it would take more than a day with me having to spend a night in Calabar. I called up the resort and asked if they could advise me on the best possible route to get there by public transport. I was told by the front desk officer that I could get a bus from Calabar to Obudu from the UniCal small gate park. I’m still not sure why they were not the first people I thought to ask.

MY ROUTE TO OBUDU

I took the first Akwa-Ibom Transport Company (AKTC) bus out of Port Harcourt to Calabar for N1,800.00. This leg of the journey lasted for more than 4 hours. I got to Calabar by 12:30pm. By the AKTC park was another transport service called Nyanya. Cost of the fare to Obudu was N1,850.00.

One problem with this service was that the bus had passengers coming off at Ikom and Ogoja before Obudu. This I discovered later was the longer route. Usually, if a bus had more passengers going to Obudu than Ogoja, the bus would use the shorter route to Obudu from Ikom and then go to Ogoja using the other route. The problem was this driver was still going further to Makurdi and didn’t even take us to Obudu; he let us off at a junction after Ogoja and we had to continue into Obudu using a taxi. I got to Obudu at 8:15pm.

I had planned to spend the night at Evergreen Hotel (it had the highest number of reviews on Hotels.ng after the Obudu Mountain Resort) although someone I met on the way suggested the Tourist Hotel. He also said there was a new hotel in town. On my way to Evergreen on the Ranch road, I saw the signboard for what looked like the new hotel and asked the motorcycle I was on to turn back and take me to the hotel.

The hotel had just opened its doors to customers on the Monday of the week I got there. It had a room with just a ceiling fan for N5,000.00 and one with air-conditioning for N7,000.00. Compared to what the other hotels in Obudu were charging, these prices were on the high side. I ended up staying at Gramic Hotel for the night in a room with air conditioning. Hotels here seemed to be rated by residents based on which ones provide electricity throughout the night.My initial plan was to spend a night or two at theranch.The next day I took a cab to the ranch. A seat is usually N600.00 with 4 passengers behind and 2 in front so you should be able to get the whole cab for N3600.00. The cab can take ages to get full on slow days and the drivers usually do not leave until they have a full load, so you might want to seriously consider paying for the whole cab.

I don’t want to go into too much detail about the ranch experience because I feel like I’ll be giving away spoilers and I want you all to go there and experience it for yourselves.I was lucky I met someone who is a student at the College of Education in Obudu. The guy knows people, so he hooked us up with someone else working at the ranch who is also from the community where the ranch is located. This dude made our time spent on the ranch a blast. He not only knew everywhere we had to visit but also took us there (although now that I think about it, we didn’t see any swimming pool and I could have sworn I’ve seen pictures of one at the ranch).

A lot of the places we visited required a fee to be paid to gain entry. Getting into the ranch requires a fee of N200 (this can cover a group). The nature reserve with the canopy walkway which is managed by the Nigerian Conservation Foundation (NCF) charges N300.00 per person. The nature reserve area (I know the ranch is a reserve) is like a rainforest in the midst of the grasslands that make up the ranch. The canopy walkway does not look safe though – this is coming from someone who used it and will probably never use a canopy walkway in Nigeria for a very long time.

The Grotto with the mini waterfall charges N500.00 per person. I still think this was a joke and that the guy was trying to take advantage of us but hey, that’s what he asked for.

The cable car service carries passengers from the reception area of the ranch down to the entrance to the ranch at the foot of the mountain where there is a water park, and then back up to the reception. I didn’t get to use the cable car or water park as the cable car operators decided to go on strike to demand that their wages be paid on the day I arrived. Go figure. The service usually runs 5 days a week with 2 days left for maintenance. The charge for this service is N1,600.00.

As for the food at the ranch, the main course at the resort’s restaurant is N2,500.00. If you think this would be expensive for you, then look for the golf course club house, there is a cheap restaurant there – you can thank me later . You can also go to the market like a lot of people do if you prefer.There is also a spa and a gym. I didn’t get a look in so I’m not sure if they were functioning.

I wasn’t impressed with the service I saw being offered by whoever it is now managing the hotel, so the N25,000.00 being asked for a night’s stay during which the generators will be switched off at night (so I’ve heard from several sources), seemed steep. Considering that I had just spent the previous night at a new hotel for almost a quarter of the cost and that I also had to leave for Port Harcourt the next day, it did not make sense for me to part with my N25,000. Also, leaving for Port Harcourt from the ranch would have added at least an hour to my journey back the next day.

The hotel part of the resort used to be managed by Protea Hotel. From the outside, some of the lodgings did not look great. The place does need more investment to maintain the current infrastructure. The wooden or log cabins looked like they needed fixing in a lot of places.

I had heard in the past that Christmas wasn’t the best time to visit because the weather then is usually cold. This information appears to be wrong. The weather might be cold during Christmas, but it will definitely be clearer as you won’t get chased around by rain clouds, not just the ones in the sky, but on the ground as well. Airtel didn’t work on the ranch. I was told lightening took out the Airtel equipment at the ranch. Thanks to getting screwed over by MTN I didn’t have any data plan to test what kind of data service was available at the ranch with MTN either. I was able to get good service in Obudu with Airtel and MTN.If you have to leave the ranch at the end of the day, then it is better to leave early; sometime before 4pm would be better as if you’re unable to find a taxi to take you down, you might have to make use of a motorcycle like I did – Not very safe at all.Well, that’s all I can remember for now.

I’m sure a lot of people reading this would have probably figured out that there are better or smarter ways to get to Obudu and back from Port Harcourt. I didn’t say the route I chose was the best, it was just the safest bet for me so judge mercifully.

Aero Contractors used to fly from Calabar to Obudu on Fridays and Sundays for N12,000.00. Although they still have it listed on their website, they no longer offer this service. I’m still putting it up here because I do not know when you will be reading this so it might be smarter for you to give them a call just in case.

Another airline (or just one plane, I’m not sure) offered flights to Obudu from the Calabar airport recently for N4,500.00. This service allegedly stopped when the new government in Cross River was sworn in. I heard there are plans in the works to resume this particular service.

For people living in Port Harcourt I was told that it is shorter to get to Obudu through Abakiliki.Also, instead of taking a bus into Calabar and then taking another to Obudu, it might be shorter to stop at Odukpani junction and then take a bus to Ikom. You can then take another bus to Obudu from there. The Pigmy bus service I used from Obudu to Calabar before dropping off at Odukpani junction also goes from Calabar to Obudu. It is shorter because it takes the Ikom to Obudu route and not the Ikom to Ogoja route to get to Obudu.