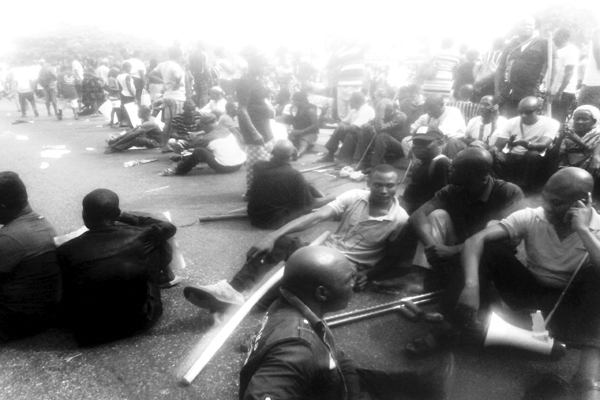 PERSONS WITH DISABILITIES SHUT DOWN CALABAR

Over 300 members of the Joint National Association of Persons with Disabilities yesterday blocked the Murtala Muhammed Highway in Calabar to protest the alleged insensitivity of the Cross River State government to their plight.

This crippled businesses in Calabar for hours as the highway is the only road in and out of the city. Most of them just laid on the tarmac.

Chairman of the association Ogar Inyang said: “The government of Cross River State is insensitive to our existence; they behave as if we do not exist. They treat us as if we have committed crime being disabled. “We’ve exhausted all avenues to dialogue with government. We wrote to the governor, deputy governor, chief of staff, we wrote to the House of Assembly, wrote to the commissioner of Police, made efforts to see the wife of the governor to plead with her to talk to her husband to listen to us but all efforts were in vain.

“We need a secretariat and vehicles to cater for our transport need. One of us should be appointed as special adviser on persons with disabilities to give us a sense of belonging.”

Also speaking, Etim Okon, the group’s Southern Senatorial District coordinator, said the solution to the quagmire was for Governor Ayade to address them in person, else “no retreat, no surrender.”

“We are on the road because the government has refused to respond to our efforts. We have been dehumanised, reduced to beggars despite our intellectual capabilities.

“The government is giving appointment, SA this, SA that, but we are never considered.  Last week, we staged a warning protest but nobody answered us. Today’s protest is a child’s play compared to the next one. We shall close down this state for days. “Ordinarily, people pay N100 from this place to Watt market, but we spent as high as N400. Nobody cares about us. Disability is not bought in the market, if it was, none of us would buy. Ayade, as a learned man, knows how people like us should be treated but he is turning a blind eye, why, why?”

Commissioner for Sustainable Development Mr Oliver Orok said: “This is the first time we are meeting since I assumed office. They have not come to complain about anything. So, I am wondering why they should do that. We are passionate about what they are passing through but they have never come to us with their complaints.  Those things are things that can be taken care of. Government is not God that will now sit down and know what your problem is.  Government has made it you will not pay tax. They have 10 per cent of employment for them, among others. As I talk to you, there are so many of them in my office working here just to make sure we accommodate them.  Those things are not issues. If it is appointments, is it not to announce appointments. If it is buses, we can get buses for them. But the governor is not in town. So I plead with them to give us one month, let them come and we sit on a round table and talk. They have never come here to talk or complain.”