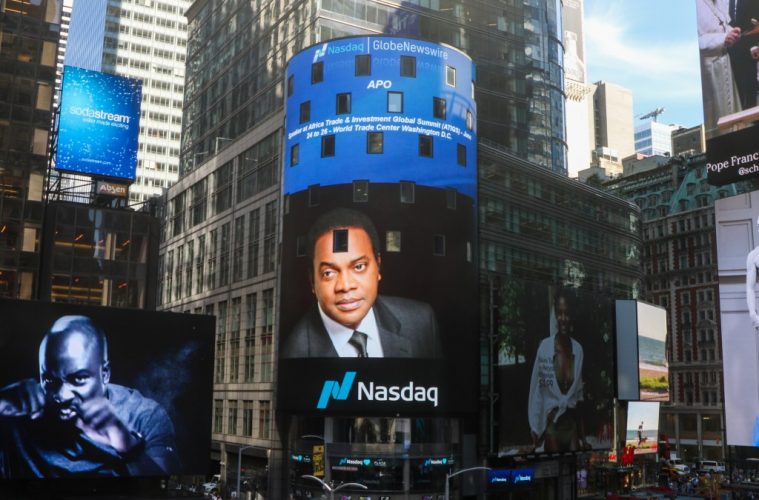 A photo of Donald Duke was displayed on Monday on the Nasdaq Tower in Times Square, New York after Donald Duke, the former Governor of Cross Rivers State speaks at the African Trade and Investment Global Summit (ATIGS).

The NASDAQ Tower is considered the most visible LED video display in Times Square and is one of the most valuable advertising spaces in the world. It’s the largest continuous sign in Times Square. It has close to 9,000 square feet of display space — about a quarter of an acre. Donald Duke who recently declared his intention to run for Nigeria’s presidency in 2019 is set to put the country on the global stage when he speaks at the African Trade and Investment Global Summit (ATIGS). He will be joining other global thought leaders within the public and private sectors to address issues bothering on foreign-direct investments and emerging markets between Africa and the rest of the world.

Today I was featured on the Nasdaq Tower. But even in this proud moment, the people of Nigeria are on my heart and mind. With much going on at home it is important now more than ever that we raise awarness around Nigeria on a global stage #EveryoneMatters #Nasdaq #Nigeria pic.twitter.com/MrkoUQ9z85

Mr. Donald Duke will be flanked during this powerful summit by notable international and continental heavyweights such as Dr. Ricardo Daniel Veigas de Abreu who is the Secretary of Economic Affairs of the President of the republic of Angola, and Alexander Gazis, the Acting Deputy Director for Economic Affairs and Sr. Trade and Investment Officer, Office of Economic and Regional Affairs, Bureau of African Affairs – U.S. Department of State. Hon. Okechukwu Enelamah, Nigeria’s Minister of Industry Trade and Investment will also be a keynote speaker at the summit

ATIGS is a prestigious biannual event aimed at promoting and facilitating foreign direct trade between Americas, Asia, Caribbean, Europe, and UAE with Africa with a view to endearing foreign and direct investments in Africa, and to provide a platform for businesses to expand into new markets.

This year’s event which will be taking place at the World Trade Center Washington DC is themed “Driving Trade, Unleashing Investment and Enhancing Economic Development: The Gateway to African Markets”.