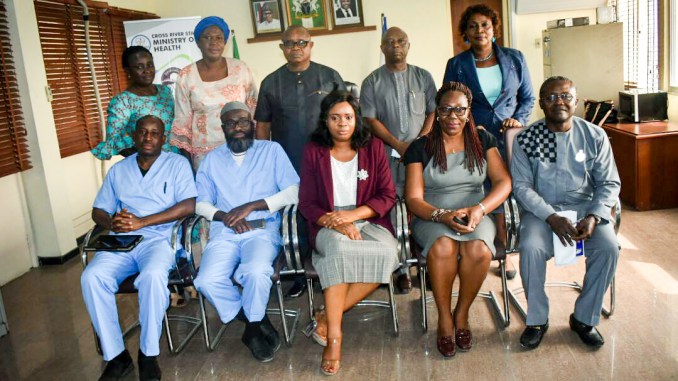 Cross River State Ministry of Health on Tuesday formally received Laboratory Scientist from Physicians Across Continent who came for an inspection exercise across Laboratories in the Ministries of Health and Agriculture respectively ahead of a proposed health intervention program in the State. This is following a series of correspondence from the State Government as disclosed by the State Epidemiologist, Mrs. Patience Uke, who led the team to the Commissioner for Health.

In their opening remark, Dr Shamsudeen Fagbo, an Epidemiologist from Saudi Arabian Ministry of Health expressed the readiness of the team to work with the Cross River State Government following their stellar performance in handling zoological disease outbreaks. Also speaking was Dr Clement Meseko, a Laboratory Scientist with F.L.I Germany who highlighted the importance of structuring an in-house Laboratory in State to further curb the long delays of results and false negative results as well.

The team commended the Commissioner for her consistency in the drive to achieve a healthy and disease, as this also informed their decision to accept the invitation to have the pilot phase of their program in the State. The program will emphasize on zoological diseases as they are gradually becoming endemic to the country. In her response the Commissioner for Health, Dr Inyang Asibong, thanked the team for accepting the invite and also acknowledged their support whenever they were being called upon. She assured the team of total support from the Governor Ayade led administration as they are poised to ensuring the availability of quality healthcare services across board.

Dr Asibong also commented on the choice of the State Government to convert the Infectious Diseases Hospital (IDH) to a TB centre because of the State of the art equipment’s in the laboratory.

The Commissioner for Agriculture, Prof Egriyan Eneji, added that the move was necessary to further build the relationship between the State Government and the organisation, and also strengthen the synergy both Ministries.

The team also identified Rabis as a highly neglected zoological disease with a high mortality rate as they went on Inspection across Laboratories in the Ministries of Health and Agriculture.