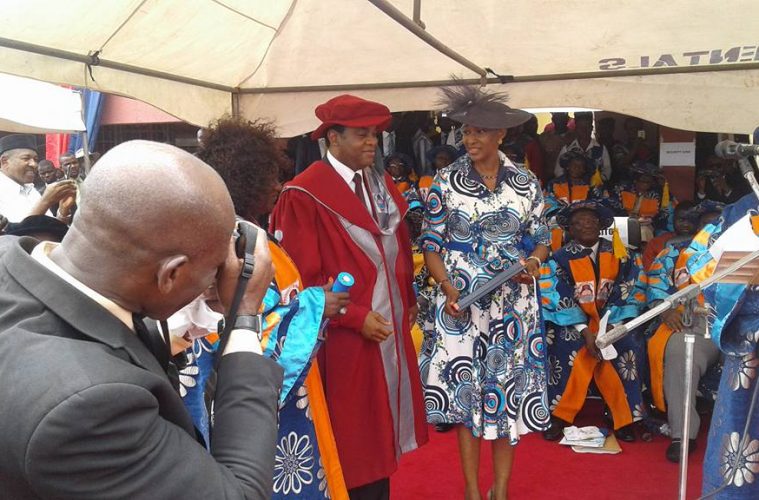 The Vice-Chancellor of the institution, Prof Zana Akpagu stated the award was in recognition of their outstanding services which they had rendered towards the development of Cross River State and Nigeria..

“The award of Doctorate of Law that we are bestowing on Mr. Donald Duke and Doctorate of Political Science on Princess Florence Ita-Giwa are in recognition of their selfless service which represents ‘service to humanity ’, the motto of the university. “This convocation is particularly special to us because it will mark the first time in the history of this great institution that we are graduating 12 first class graduates out of the 7,222 graduands here today. “As a policy of the university, the Senate has approved automatic employment to all the first class graduates”, Prof. Akpagu maintained. Responding, Mr. Duke commended the institution for the honour done him, stressing about 13 years ago, the university had approached him for the award, but he turned the offer down as he felt he was not mature enough then to receive the honour.

“Am indeed honoured by this incredible distinction you have bestowed on us. The first time in the history of this institution that two Cross Riverians are awarded doctorate degrees. I thank the University authorities for the recognition.

“To me, this award is dedicated to all our years in service from 1997-2013. We have decided between us to support the school with N10m annually and I will personally work with the school alumni to develop a befitting alumni centre for the university”.

On her part, Ita-Giwa lauded the school senate for approving the award, even as she said that it was an indication that the society still needed her services at 70. Her words: “The award is like a birthday gift to me. I have never seen anywhere in the world where a 70-year-old woman is celebrated like am celebrated here today. “It means that I will not retire. It is a beginning of a new carrier for me to continue to affect lives”.

One of the graduands, Uduak Anifioke Luke, wife of the Speaker, Akwa Ibom State House of Assembly who bagged a Doctorate degree in Biochemistry lauded the university management for creating an enabling atmosphere for learning. The wife of the Hon. Speaker of Akwa Ibom State House of Assembly… Dr.Mrs Uduak Onofiok Luke on Bended knees to say thank you to her husband for all his support during her academic pursuits. Recipient of an honorary Doctorate from the University of Calabar – H.E Dr Donald Duke & his dear wife H.E Onari Duke