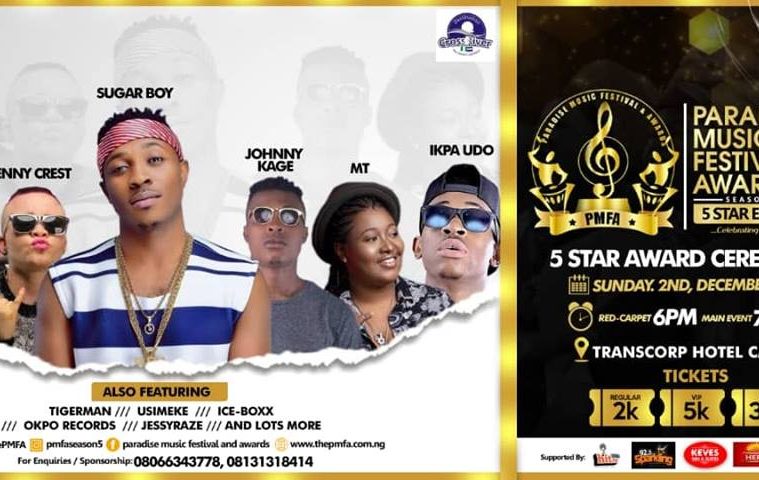 It’s going to be fun, glitz and glamour at the 5th Paradise Music Festival And Awards (PMFA) as pop star, Sugar Boy will lead top music stars to storm Calabar for South-South’s most revered music awards.

This year’s event which is in it’s 5th year is tagged ‘5 Star Edition’ and is slated for Sunday, December 2, 2018 following the flag-off of the Calabar Festival by Cross River state Governor, Prof. Ben Ayade and the Aids Walk on the 1st of December.

The 2018 edition is Themed: ‘Music Beyond Borders; with the ‘Hola Hola’ crooner, Sugar Boy expected to make a special appearance.

According to the convener, Effiom Trombone, “Sugar Boy is a lucid example of talent who though from Akwa Ibom, has crossed borders with his music and his music is beyond borders, that has inspired our choice.”

The organiser’s, South Central Communication assures that the night will be a nite of fun, glitz and glamour, with many surprises.

“In the midst of the fun and paparazzi, PMFA Season 5 award ceremony will reward winners from competitive categories and presentation of honourary awards to deserving Cross Riverians and Akwa Ibomites whose talents have really shaped the music industry in the region,” a statement from the organisers read.

The Paradise Music Festival & Awards was created five years ago in a bid to create synergy between Akwa-Cross music stars at home and in diaspora, and to also reward creativity in the music industry as well as strengthen the chord of unity amongst the two sister states.

The event will take-off with a Red Carpet session fixed for 6pm at the popular Transcorp Hotels, Calabar; while the main event kikcs-off by 7Pm with celebrity hosts and a tight fashion Police security to put nominees and guests in the spotlight.