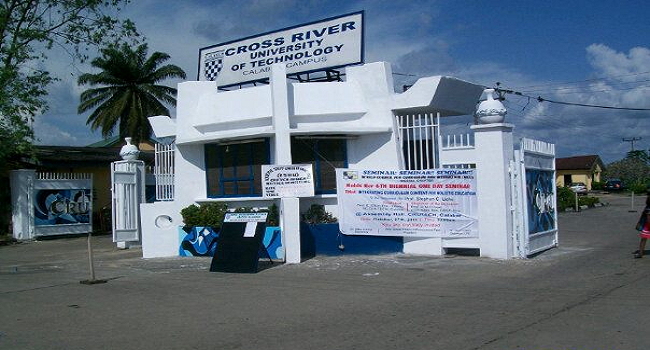 Cross River University of Technology, CRUTECH Alumni Association have appealed to the Cross River State Government to pay attention to the plights of the institution especially on the issue of funding.

The association that said this during the Central Working Committee meeting held recently in Calabar added that it will be a great shame if the university is allowed to die.

The National President of the association, Eyam Abeng said that Cross River State was blessed at this time to have two Professors who have both spent their formative years in the university as Governor and deputy and as such should understand perfectly the plights of the institution.

According to him, “We have always talked about the funding situation in CRUTECH. The university has been left almost like an orphan; it is urgently in need of government attention and we want to appeal to our two erudite Professors to please make CRUTECH feel some government attention”.

He said that “The greatest asset of any government or organization is its people. The Ayade administration has written its name in gold in the issue of workers welfare in the state. We’re only begging that such gesture should be extended to CRUTECH.

“You can not leave a lecturer hungry and you expect him not to compromise the system. These people also have children and families that depend on their salaries to survive. As we speak, CRUTECH is almost the only government institution that workers are owed up to two to three months salaries. This is a sad commentary that Governor Ayade should look into”.

On other things affecting CRUTECH, Eyam said that “We have been talking about the aggressive encroachment of CRUTECH land by strange fellows for sometime now and we are surprised that Government has not seen the need to step in.

“From Calabar to Okuku, people are illegally laying claims to CRUTECH lands. We have been consulting with traditional rulers of our host communities to see how they can help us but they need the support of the government. They can’t address this alone because some of the land grabbers are not even indigenes of their communities”

The association frowned at the recent violent protest by students adding that, the action was so shameful and should attract the appreciate punishment.

“CRUTECH is not a charity organization and the university or government is not running free education system. All over the world,school fee is an obligation everybody must meet before been recognized as a bonafide student of any institution.

“But it is rather unfortunate and pathetic that students would engage in a shameful act of destroying school properties for being asked to pay school fee. In some quarter, I hear them saying they were fighting for their rights. Who told them nonpayment of school fee is a right?

“As an association, we want to call on the school management to take strong stance against those who destroyed the university properties. We must do everything possible to avert the repeat of such shameful act.

“Nobody is saying they should not fight for their rights but you can only fight for your right when you’re a bonafide student and in this case those who engaged in this act are not bonafide student; so which right are they fighting for?”, he asked.