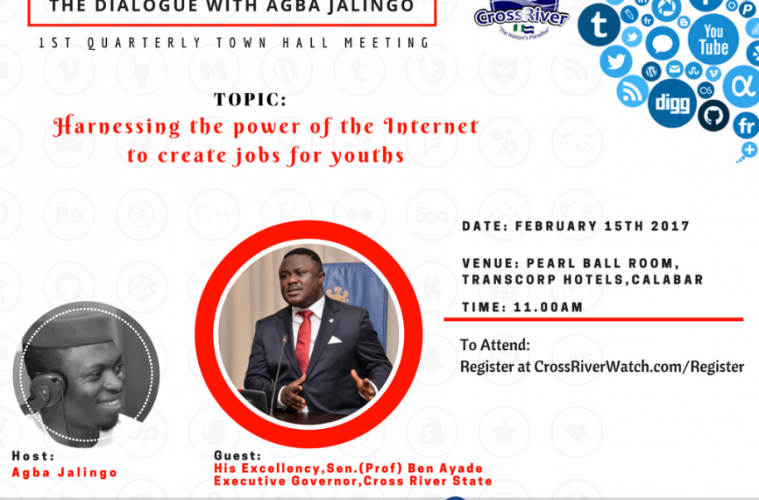 The maiden edition of the Dialogue With Agba Jalingo town hall meeting scheduled for January 27, 2016 has been postponed to February 15, 2016 says the producers of the controversial radio program.

The program is aired live every Sunday from 6-7 PM in the studio of HIT 95.9 FM Calabar and has gone 28 episodes featuring different sectors of the Cross River socio-economy.

“Due to unforeseen changes in the itinerary of Governor Ben Ayade of Cross River, guest of the maiden edition of The Dialogue With Agba Jalingo Town Hall meeting, who is currently out of the country, we regret to announce the postponement of the event from Friday, January 27, 2017 to Wednesday, February 15, 2017” a statement signed by the producers, Charles Kalu and Macdonald Anyangbe read. The statement obtained by CrossRiverWatch said the program will continue to be aired as usual every Sunday with this week’s edition to focus on the communal crisis rocking Cross River State and the discussions to be moderated by Co Host, Jonathan Ugbal following the unavoidable absence of the host, Agba Jalingo.

The producers also said registration for interested participants will continue with slight changes to the promotional strategies employed for the town hall meeting.

“The postponement also gives us an opportunity to prepare more for the town hall meeting as we will leave no stone unturned and no turn unstoned to ensure that the Cross River conversation bears positive fruits” the statement read.

The program according to its contents providers Giant Concepts and media partner Calabarblog.Com will be interactive as it will be broadcasted on Radio, Television and electronic platforms.