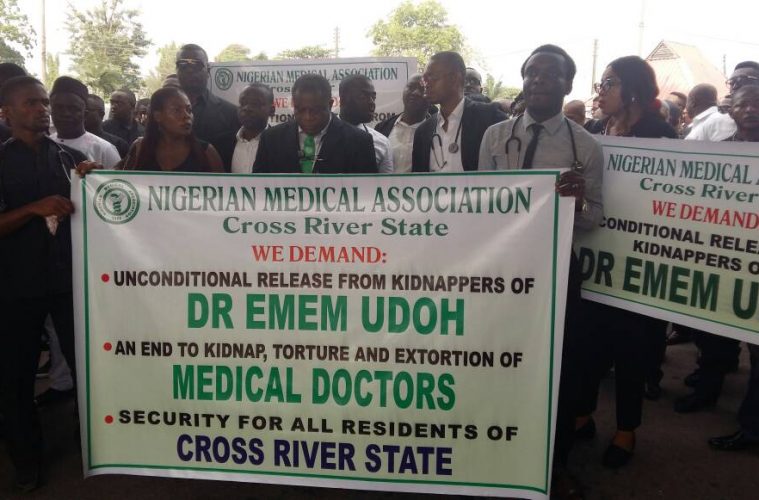 PRESS RELEASE BY NIGERIAN MEDICAL ASSOCIATION (NMA) CROSS RIVER STATE FOLLOWING THE KIDNAP OF ONE OF ITS MEMBERS ON TUESDAY 9TH JANUARY, 2018

Gentlemen of the press, You will recall that four (4) days ago, the Nigerian Medical Association (NMA) Cross River State Branch called a press conference in respect of the kidnap of a Doctor in Akamkpa Local Government Area, Cross River State and we raised concerns that this kidnapping seemed to be targeted at Doctors living in Cross River State.

We are sad to inform you that another of our member, Dr. Emem Moses Udoh of the Department of Paediatrics and Child Health UCTH, Calabar has been taken captive in the early hours of this morning of Tuesday 9th January, 2018 by unknown armed men to an undisclosed destination. Her properties including; Vehicle, TV set and mobile phones were forcefully taken along with her, leaving behind her eighteen (18) months old baby in the care of her little niece living with her.

You will recall that the Nigerian Medical Association (NMA) Cross River State Branch in its Press Release of Friday 5th January, 2018 and a follow up Communiqué of Monday 8th January, 2018 had stated that any further kidnap of a Doctor or his/her dependant, will result in the immediate and indefinite withdrawal of Medical Services from our members in both Private, Public and Institutional Hospitals in the State (University of Calabar Teaching Hospital, Federal Neuro Psychiatric Hospital, General Hospitals, Medical Centers, Mission Hospitals and Private Clinics/ Hospitals).

The Nigerian Medical Association Cross River State for the avoidance of doubts cannot continue to safeguard the lives of others while ours is under constant threat by armed bandits and kidnappers. It surprisingly will appear at this point, that the various security organizations in the State are either helpless or are complicit in this kidnapping racketeering in Cross River State or how else will one explain the fact that a Doctor is kidnapped just within three (3) days of the release of another from kidnappers and the perpetrators of these heinous crimes are never identified and arrested.