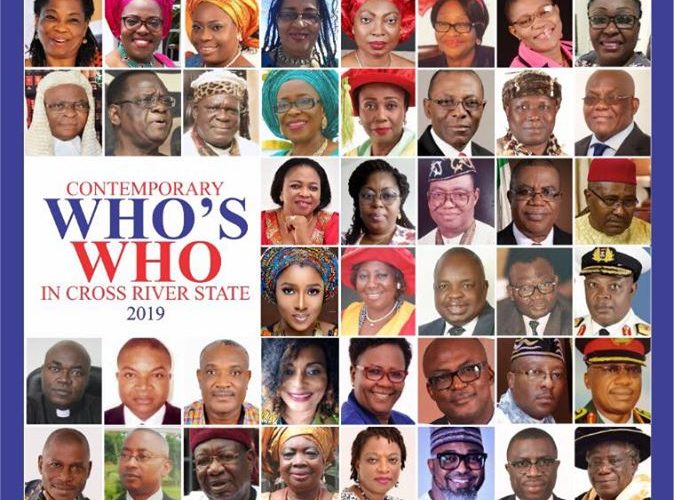 Profiles & Biographies, one of the nation’s top documentation firms, has released its 2019 edition of ‘Contemporary Who’s Who’ in Cross River State.

This year’s edition is the fourth in the series of the biographical compendium on Cross Riverians and has on the cover, photos of some of the listees as well as accompanying certificate of listing with photos of the listees on them.

According to the CEO of Profiles & Biographies, Kammonke Abam: “The philosophy behind our specialised publications is summed up in our motto: no one can tell the story of the struggles of a people better than the people themselves. We also do know that in the world we live in, if you do not say I am here, nobody would recognize you. As a people, we can only go as far as we are willing to project ourselves. We are in the federation that is highly competitive and our worth as a state would be appreciated by the way we are branded.

“There was a time that we were branded as a people who were laid back and stereotyped as a people that excel only in culinary and domestic help. Through the intelligence, creativity and enchanting style of the leadership the state has enjoyed by the Donald Duke and Liyel Imoke governments, the state was re-engineered and rebranded as the ultimate destination for business and leisure. It is truly Nigeria’s paradise, coupled with the scenic beauty, the curvy and spell-bound mountainous sights, the aquatic splendor and the never ending rainforest of the state.

“In the same manner, the state is endowed with men and women of incredible charm, wit and intelligence. Cross Riverians bestride the world of business, governance, sports, academia and other vocations and professions.

“That the state is a trailblazer is a well known fact. That is the reason we need to celebrate the state and its people. Celebrating people brings the best out of them,” Abam said.

He continued: “The essence of this project is simply to acknowledge and recognize the achievement of our sons and daughters who have distinguished themselves in their chosen careers and those who also have contributed in a significant way to the development of their communities and the society at large.

“With a very wide circulation rate, Contemporary Who’s Who in Cross River State serves as an invaluable resource to government, the diplomatic corps, captains of industries, media practitioners, researchers, and students. It is the most comprehensive, authoritative, factual and up-to-date biographical compendium on eminent Cross Riverians home and in Diaspora,” Abam said.

“We believe that those who have been profiled on account of their efforts and achievements would receive more inspiration to work harder and achieve more in future,” said Profiles & Biographies CEO, Kammonke Abam.

Other eminent personalities listed in the compendium are accomplished academics, captains of industries, technocrats, innovators, clerics of note, first class traditional rulers, politicians, business leaders, top civil servants as well as youths who are using their creative skills and competencies for social and economic growth.

Hard copies of the book and the accompanying certificate of listing can be obtained at the headquarters of the Cross River State Ministry of Information and Orientation, Calabar.