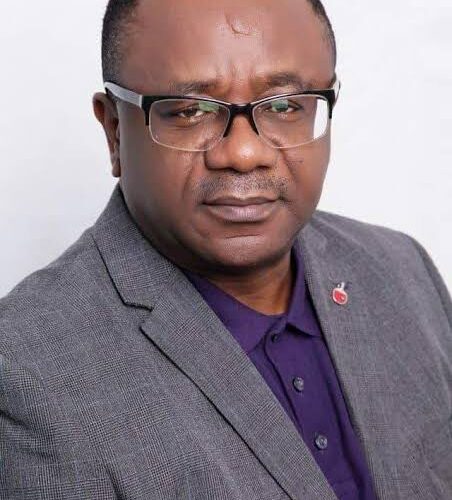 In case you meet Mr Emmanuel Elom, Chairman, Cross River State Sports Commission, tell him that there’s no where in the world that you will leave the substance for the shadow and try to fool the people . Attacking the person of Rt Hon Orok Duke, will not take you anywhere or help your despicable disposition.  Not this time.

You can never change things by fighting the existing reality. To change something,you build a new model that makes the existing obsolete.Reality bites.

Elom doesn’t understand the weight of the office he carries. Sports Commission is not about collection of allocation/subvention from the state government, without showing commensurate progress in grooming new athletes and winning International Laurels, like Rt. Hon. Orok Duke has been doing for over 30 years now. After, you would shamelessly,put up enlarged pictures of Orok Duke’s Table Tennis stars on Bill Boards all over Calabar, without acknowledging the Hero and mentor that has made CRS the number one for Female Table Tennis for 26 years now. Ingratitude is a lesser witchcraft.

Sports  Development, is not Poverty Alleviation,you cannot have zero Chairmanship out of 36 Sports in the South South and Claim to be making progress. Elom,Ekanem Ekpenyong and Etim Coco-Bassey,Omara,(Director of Sports), have failed woefully. They owe Cross Riverian an explanation how we came so low and disjointed in sport.

People learn on the job, some learn from mentorship and coaching. Rather than learn from Rt. Hon. Orok Otu Duke, a man who has been  The CRS Sports Ambassador, since 2005, you rather choose to disparage him with blackmail.

Otuekong Orok Otu Duke, is a man who is single handedly keeping Cross River state in the Comity of Sport through table tennis,since 1988.

I don’t  need to be hard on you, Emmanuel Elom, because you were sentimentally nominated to head sports, as a part of the Northernization Agenda, as you know next to nothing in sports and despite the fact that the highest public  office you had held previously, was as a Personal Assistant  to Ogoja Local government Chairman, hence the knowledge gap..and the audacious use of,” Honourable”as a title.

That is why you can’t explain to Cross riverian and even to your Principal, why no Cross Riverian is heading any of the  36 sport  Associations at the zonal and national level. Every state at the zonal level is entitled to head at least 6 sport association out of the 36. We have already lost out on the 28 sports conducted. Cross River state couldn’t head even the most innocuous sport as Chess, let alone shooting and archery. The Director of Sports,CRS, Etim Coco-Bassey,(Omara),was the only DOS,out of 6,who was not in Benin on 22/9/2021for the Zonal Elections. Little wonder why we lost in all the Chairmanship positions, contested. He and the rest of his colleagues,must have been staying back to share the Sports Monthly subvention, meant for Performing Athletes,only. Continue.

The last man standing, Chief Orok Duke is vying for the Zonal chairman of Table Tennis Federation on the 30th September 2021, yet the Chairman  of a Sports commission is not aware? How incompetent. Duke that has been the Chairman of South South Table Tennis for the last 16 years?

If I were to advise HE,Gov. Ayade, the governor,  I would urge him to disband that Ceespool of corruption in Sports Commission and call for a thorough audit. It is not a matter of buying mercenaries from other states for the sake of Sports Festivals and then they return to their bases,without availing the resident athletes the opportunity to imbibe further skills.

What is biting the current Sports novices,is that,during the last Sports Festival in Benin,when Elom,ignorantly dropped Table tennis,Hon Duke,fought through that CRS Deputy Governor,added and spent 2.5 million to pay for equipment,hotel accommodation and feeding for Table Tennis and they won, 2 medals. What that means is that since 2000,under Hon Orok Duke,Table Tennis has become the sport that has won the highest number of medals.

Make way, let Him Duke keep winning, so that you will have Stars to display on billboards and put your medal-less face by the side to claim, what you know nothing about,nor worked for.

You have sworn to make sure that CRS scores zero, out of 36 sports, you have written to other states that you have orders to stop Hon Orok Duke from getting elected on 30/9/2021 in Abuja, I wish you luck in your  wild goose chase geared towards bringing down sports in CRS.

Otuekong Orok Otu Duke, happens to be the only Cross Riverian, out of the 36 sports, contesting for a Chairmanship Position. Do your best and fight harder against him, if you may betray him to score a point.

Remember what McAnthony told the traitor, Brutus: ” we shall meet at Philippi.” Come 30th September, Let us meet in Phillippi

NB: Opinions expressed in this rejoinder are strictly attributable to the author, and do not represent the opinion of Calabar Blog or any other organization the author works for/with.