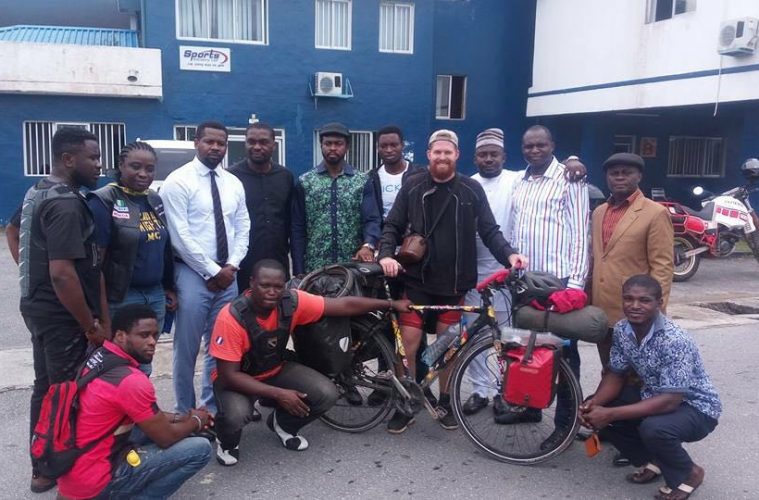 Having Sune Rahbek Thuesen in Calabar brings quite a huge level of inspiration to our personal pursuits and believes in the mantra that anything is possible. The Danish Cycler is in Nigeria at the moment and has landed in Calabar the Capital city of Cross River. Cycling all through from Denmark, ferrying across some parts, then landing in Lagos where he proceeded by bike to Benin, then Enugu through Abakaliki and Ugep to Calabar  where he was welcomed at the Destination cross River roundabout by the S.A to the Governor on Tourism, Eric Anderson, Special Adviser, Sports, Effiom Effiwatt and Special Adviser Youth Development, Prince Godswill Edward. Sune Rahbek Thuesen as he arrived in Calabar yesterday at noon to a warm welcome by SA on Tourism, Eric Anderson and S.A, Sports, Effiom Effiwatt

The conquest for Sune started out with his friends who started a bicycle marathon to Gambia to raise money for a charity. Thinking that Gambia will be his last stop he then decided to continue and has been at it for one year now and hopes to make it to South Africa, his final destination six months from now. He told us that he was warned by everyone even his embassy not to come to Nigeria but he took the risk and came to see for himself. He says that Nigerians are fun loving people as he has been welcome and assisted in every way possible in all the towns and villages he has passed through. It has truly been an unforgettable experience for him. S.A to the Governor on Youth Development, Prince Godswill Edward and Sune Rahbek Thuesen on arrival at the U.J Esuene stadium, Calabar

He will ferry to Cameroon after two days of rest and continue from there to South Africa. This sheer determination from this 26year old Danish man is an inspiration to all of us that Whatever you put your mind to achieve it possible. Sune Rahbek Thuesen, named his bicycle, “The Rising Phoenix” and justlike the fabled bird that rises from its ashes, Sune is motivated to keep on moving, we wish you all the best from Cross River State