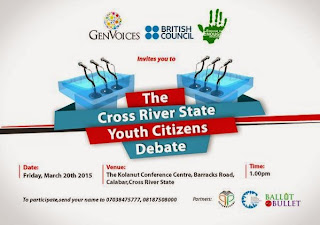 Generational Voices (GenVoices) in partnership with Enough is Enough (EiE) and in collaboration with British Council will run a Citizens' Debate on the upcoming elections in Nigeria. This will be facilitated through GenVoices' conversational platform called GenTalks.Much of the focus of the political process is on highfaluting rhetorics that the average citizen rarely connects to. The Citizens' Debate is therefore created for young Nigerians to articulate and present their rationale for deciding which of the candidates to support. This spins the wheel to focus on the critical aspect of the governance process; the people.According to Cal Thomas, "One of the reasons people hate politics is that truth is rarely a politician's objective. Election and power are.This Citizens' Debate is designed for supporters of the presidential/governorship candidates in Nigeria's General Elections to articulate and present their rationale for deciding what candidate to support. It will be targeted at young audiences aged 18-35.The Objective for this debate is to encourage Youth voter education and engagement to increase awareness about the process and encourage the use of analysis and facts in choosing elected officials. The exercise will also stimulate interest and dialogue about the elections and relevant issues.Organized through a peer- to peer model, the Youth Citizens Debate will offer the platform for Youth Leaders and supporters of the various political parties in Cross River State to sell their parties manifestos, achievements and proposed interventions if elected to office to their peers. This will ensure a no-holds-barred and unscripted session of political conversation amongst young people.The debate details are as follows:Date: Friday, 20th March 2015Venue: Kolanut Conference & Events Centre, Barracks Road. CalabarTime: 1:00pm PromptRegistration: To participate, send your name and email to 07038478577 or 08187508000Project Partners: Afterschool Peer Mentoring Project, Global Shapers Calabar Hub, Ballot Not Bullet