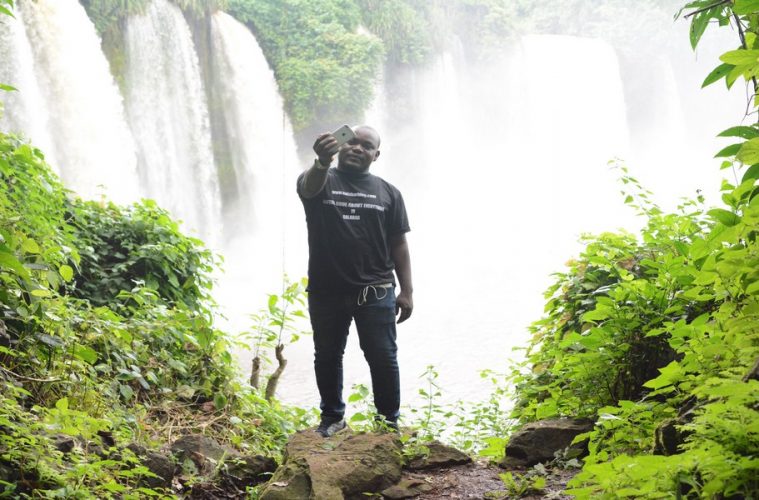 Just as we promised to give you updates on our wakwaka every month to different tourist destinations and brining attention to them through social media. Last month, 28th July, We took a trip to one of the seven wonders of Nigeria, Agbokim Waterfall!

Located 315km from Calabar, we took off from the muster point (Mobil by MCC, Calabar) at about 9:45am instead of the planned 8:00am; blame it on the rainy morning that made it difficult for people to come out early.

The road trip was full of excitement, the good music in the car kept everyone awake as we journeyed through six local government areas; Odukpani, Akamkpa, Biase, Yakurr, Obubra, Ikom to Etung with a brief stopover at Mkpani junction (Yakurr) to eat like locals, boiled corn and pear. We got to Cameroon border junction, Ikom, the road leading to Agbokim, at exactly 2:15pm.

From this junction, we were told Agbokim was 17km away in Etung local government area not Ikom as mostly told.

The road from Calabar to Ikom was fair with a few bad spots but the road from Ikom to Agbokim was rough and rugged, again this calls for government intervention in the development of infrastructure at our tourist sites.

The waterfall needed no announcement, once we got closer, the sound was thunderous, I could see the excitement on everyone’s face. We got to Agbokim waterfall at exactly 3:05pm and were welcomed by the tour guide on ground, Mr. David.  He was passionate about his job and well detailed on every attraction and mystic around the waterfall.

The view from the top of the waterfall was breathtaking, boundless amount of nature stored in one place.

The cascading of seven waterfalls each one gliding down in seven-faced rows gives a blend of tranquillity, beautiful scenery, natural vegetation which fills the nostrils with a breath of fresh air. The experience was fun-filled. Going down the plane of the fall

We arrived late in the day, so we missed the rainbow at the bottom of the fall that comes up at 2:15pm daily. It would have been so cool. Also, we coundn’t get to feel the water at the bottom of the fall because it was too full to swim. However, we were lucky to see all the seven falls come out in full. The tour guide advised the best time to swim was during the dry season. At the mysterious King and Queen’s throne We took lot of pictures, all thanks to our in-house tour photographer WeeShotIt. When the tour was completed, we had a mini picnic at the relaxation house at the top of the waterfall to cool off the hiking before we set out at about 4:15pm back to Calabar. Refreshment point at the top of the waterfall

In all, it was a memorable and fun-filled experience.

Join our wakawaka team as we explore another fascination destination this coming Sallah Holiday.