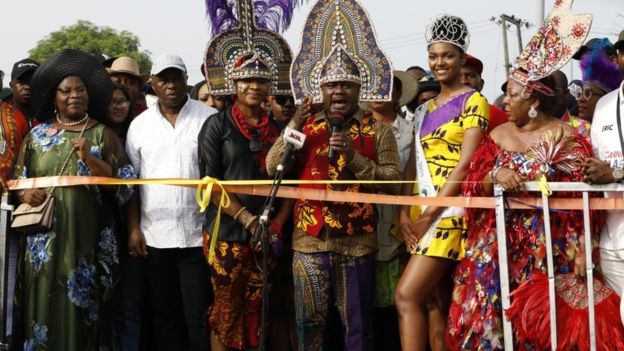 REVIEW: FOR SURVIVAL OF CARNIVAL CALABAR

The 2018 Calabar Carnival has come to a close and revelers have since returned to their respective places of origin reliving their various mixed experiences. While some who were at the event for the first time enjoyed it, some regulars believed it has lost some of its lustre and advising that some changes need to be made to restore it to its glorious past.

Let us be clear here, this write-up is not a critique of the carnival. On the contrary, it is an appraisal of what has been done well and what else needs to be done to make it better. This clarification is necessary because of the penchant of some people to misconstrue and politicise such altruistic intentions to score cheap political points.

It has been 14 years since former governor Donald Duke established the Calabar Carnival. Duke’s intention was to make the state a prime destination of choice for fun-seeking Nigerians who often spent billions on foreign vacations annually.

Calabar Carnival was therefore integral to Duke’s overall tourism development plans whereas he developed a calendar alongside the various existing tourism attractions, cultural festivals as well as developed the bio-diversity assets in the State’s prime forest to market to global tourists.

Successive administrations after Duke have sustained the tourism tempo albeit some novel initiatives like the Obudu Mountain race which attracted world-class athletes to the annual event which usually held in Obudu Cattle Ranch was scrapped. They also injected slight adjustments into the carnival procession extending the duration from its initial one-day affair to about four days. Today, it has been expanded to incorporate different variants of cultural, children and adult carnivals.

The present administration has successfully unbundled and excised the bikers who formed part of the one-day carnival and opted to set out a distinct day for bikers’ carnival, ditto cultural carnival and street party.

On the reverse side however are complaints by revelers firstly, about the timing for the rollout of the carnival. In the last two events, the first band rolled out after 4pm. After the displays along the 12km route, the various bands’ members ended up in the stadium around 2a.m. feeling tired and completely exhausted which is against the spirit of the carnival.

While it is good to make changes, such changes must be programmed to fit the strategic thinking of the planners and deliver the overall objective of the carnival. For instance, under Duke, the rollout time from the starting point was between 9a.m. – 10a.m.

Even during Imoke, despite an unusual heavy downpour a day before the 2012 Carnival, the bands were still able to muster and roll out their float right before midday.

All the bands were arranged in sequences and co-ordinated to ensure there was synchronism and no time was wasted. The idea behind the early rollout was to get the bands out there before the sun rose so high, with such high spirit and energy, they bands could entertain by-standers who thronged to watch from both sides of the road.

The projection was that the first band will arrive the stadium from 4p.m. and do its final presentation followed by others all programmed to end on or before 10p.m. The reason for this was simple: the carnival is usually aired live by a television station of choice. These TV stations run on very strict programming schedules such that if you are allocated a time belt and eventually miss out on your allotted time, your event can no longer go live. You lose out.

With the new arrangement of bands kicking off from different points with the plan that people can see atleast 2 bands before nightfall, in last 2 years this arrangement has failed leaving visitors and tourists alike waiting on the carnival route a whole day without a glimpse of any carnival band. This has negatively affected the quality of people that come on the streets to watch the carnival. Are we having repeat visitors should be another question to be asked? Again, why do we close the roads at 10am when we know the Carnival won’t roll out till about 4pm, maybe henceforth we should prepare for a night carnival?

However, according to sources from Carnival Commission, the reason for the late kick off last year has been blamed largely on the band leaders who had formed a cartel of sort to jeopardize the carnival, their own event. It was alleged that Band leaders refused to roll out their bands even when the governor was ready for kick off at 12 noon, the bands protested lack of funding and the late release of funds. Even though our source revealed that the total funding received by each band was 65million naira as against the 50million naira received from previous administration.

The second issue is that of refuse that litter the route in the aftermath of the carnival. In the past, the Calabar Urban Development Agency (CUDA) was usually the last ‘band’ as it mopped up all the refuse littering the carnival route up to the stadium. Today, it is not the case and there do not seem to be an alternative either.

Lastly, is the issue of security, Initial carnivals were programmed to end before midnight so that law enforcement would be able to effectively provide a right of passage for revelers and protection from predators, pickpockets and hoodlums who usually loitered around event centres to steal and cause mayhem. Thus, the present timing makes the revelers vulnerable to attacks from criminals with law enforcement overstretched to effectively react to such attacks.

What is to be done? Without a doubt, the time has rightly come for the carnival commission to be incorporated into a limited liability company that would run independent of government to usher in a regime of transparency and accountability.

Up until this moment, no one knows for sure what it takes to host the carnival and how much is being raised from sponsors annually because there are no published audited accounts. Even the state tourism bureau and internal revenue service have no figure of how much tourism development levy (TDL) was generated during the festival period. Incorporating the carnival as a limited liability company would put it in a viable stead to determine the desirability or otherwise of some carnival activities too.

The Bikers’ carnival is also another novelty introduced into the carnival activities and it has grown popular yearly. However, a lot still needs to be done in the area making it a fun event, safety and quality control. It is not enough to just throw bikes on the street with no thrills and stunts associated with such events. Have you seen the Abuja car racing event?

Moving forward, there is a need for a Bikers’ manual which would spell out clearly the caliber of bikes to be used, safety precautions like the compulsory gear a biker must have for himself and passenger and also an insurance policy for the bike, biker and passenger just in case of a mishap.

Again, the commission should be converted to a limited liability company and allow the bands to run on their own profitably and source for sponsorship. Another area that should be leveraged is merchandising. Doling out subvention yearly to the bands is not ideal and wasteful. The present government has provided a huge opportunity through the establishment of the garment factory to leverage on the huge merchandising potential.

The organisers of the 2019 carnival should take note of the points raised above and ensure the bands leave the start off point early and arrive the stadium before midnight so that spectators would view and appreciate them.

It is not late to get things right. For instance, after initially failing in its efforts to organise the street party in the previous edition with the ill-advised mounting of speakers on the street kerb, the organisers this time around got it right.

It would be the first time since the street party was introduced that people really keyed into the concept and had a great time. The decision to allow the bands take possession of the street party with their Dee Jays holding the crowd spellbound was a winner and would have the party-goers talking about it in a long while and wishing that the 2019 event should arrive tomorrow

The Calabar festival/carnival though initially a 32-day event characterized by series of activities and music shows that had featured some of the best international acts has been reduced to a 4 day event. This last festival came and went without any organized stadium concert as seen in previous years.

According to public opinion and sampling, In the whole of the festival, the only two events that were properly organized with a good turnout was the Miss Africa Calabar Beauty pageant held on the 27th of December at the Calabar International Convention Centre with contestants from 25 countries and featured thrilling performances from the trio of Tiwa Savage, Mr Real and 2baba.

The second event that gained traction was the International carnival held at the U.J Esuene stadium where over 30 foreign countries participated.

The Lithuanian delegation set Calabar on fire; in a good way. Their performance was just one of many exhilarating performances from the visiting countries as they all wowed the audience in their own unique ways.

The South Africans with their bold bare skin Zulu war dance emerged winners, Mexico came second as they danced to sonorous tunes that had African undertones and Lithuania came third with their “fire tribute” to Calabar.

For the survival of the Carnival Calabar brand a lot of changes need to be done to restore its seeming lost glory.