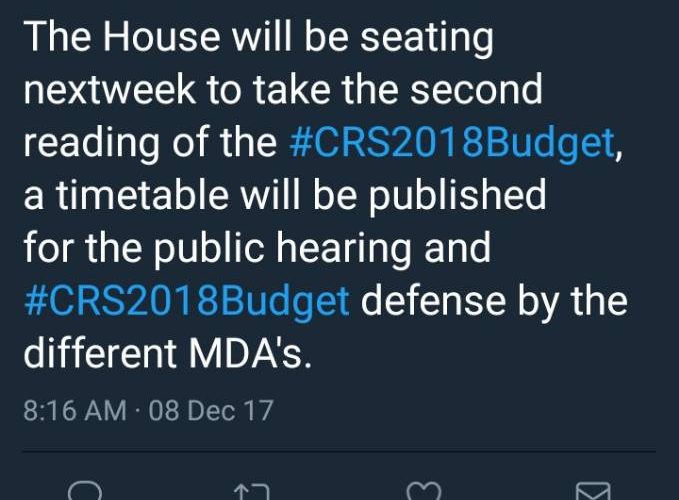 The Assembly announced this on Twitter via its handle @CRS_HOA when it replied CrossRiverWatch’s News Editor, Jonathan Ugbal enquiry as to when the House will convene for that purpose.

“The House will be seating nextweek to take the second reading of the #CRS2018Budget, a timetable will be published for the public hearing and #CRS2018Budget defense by the different MDA’s,” the tweet read.

Mr. Ugbal who in a series of tweet criticized the state’s non release of t details of it’s 2018 budget with the trend; “#CRS2018Budget” had earlier tweeted via @NaijaJonathan that: “We should also demand that the @CRS_HOA gives a detailed sitting arrangement for the defense of the #CRS2018Budget.”

He also demanded that the speaker, Honorable John Lebo informs Cross Riverians when the Budget will be read for the second time on the floor of the House. 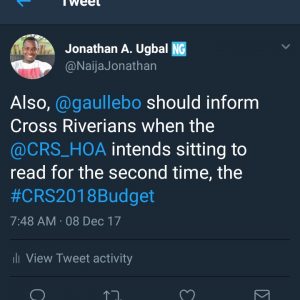 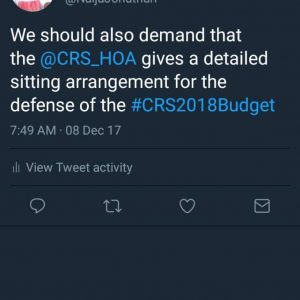 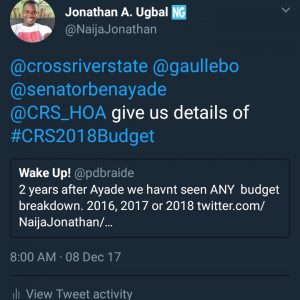 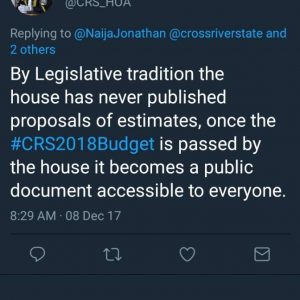 A week later, concerns such as accessibility of the proposed budget raised by opinion makers and commentators is yet to be addressed and Mr. Ugbal had queries whether the House received the detailed breakdown of the budget and if it can be made available to Cross Riverians.

But the Assembly replied and said it does not publish estimates of the executive.

“By Legislative tradition the house has never published proposals of estimates, once the #CRS2018Budget is passed by the house it becomes a public document accessible to everyone,” read the tweet.