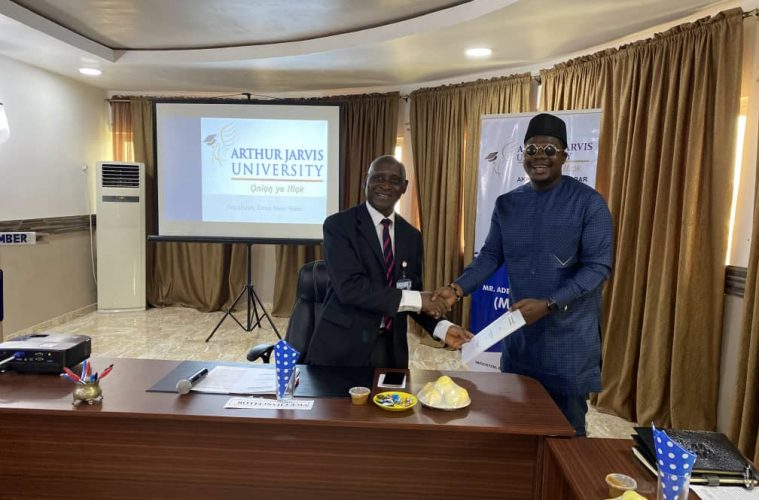 Arthur Jarvis University, the first and only private University in Cross River has appointed Mr. Adebowale Adedayo popularly known as Mr. Macaroni as a Goodwill Ambassador for the institution by the Vice-Chancellor, Prof. Ani Nkang at a ceremony marking his visit to the institution recently.

The Vice Chancellor who said the institution has received giant strides in its three years of existence commended the founder, Sir Arthur Jarvis Archibong for actualizing his dream of contributing to quality education in Cross River State and Nigeria at large.

Nkang, said that the appointment of  Mr Adedayo as Goodwill Ambassador is a result of his Sterling qualities of being a Content Creator, an entertainer for Television, online film, radio and stage who believes strongly in using his art to entertain, educate, inform and rejuvenate the society.

The Vice Chancellor expressed optimism that the Ambassador will help the institution to leverage on his great platform, influence and positive mentorship of youths nationally and globally to attain her goal of academic excellence.

He discloses that Goodwill Ambassador, Adedayo will play a key role in raising awareness, expand the institutional reach and promote the competitiveness of the university as an institution of choice in Nigeria and the West Africa sub-regionn.

Nkang , on behalf of management, Senate, staff, and students commended the goodwill ambassador and welcome him to the university community.