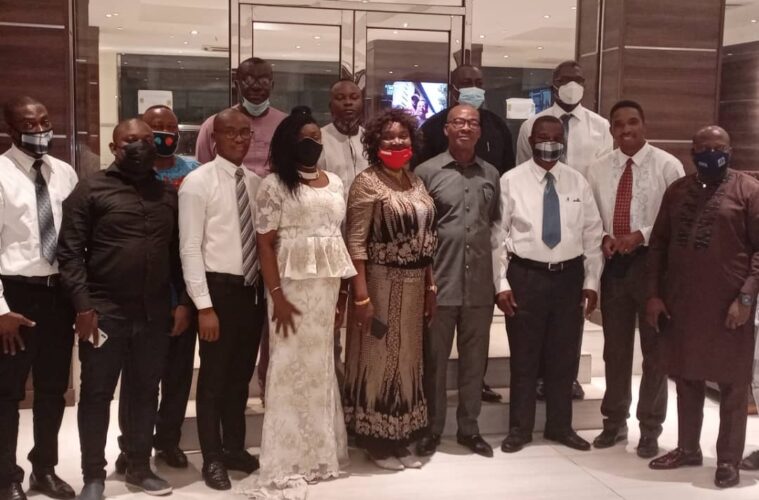 The Church of Jesus Christ of Latter-day Saints through the Communication Council of the Port Harcourt /Uyo Area Coordinating Council, has hosted top media executives to a dinner in Calabar on Thursday, February 18, 2021 at Monty Suites Hotel, Calabar.

In her opening remarks, the Director of Communication, Port Harcourt/Uyo Area Coordinating Council which covers Rivers, Bayelsa, Akwa Ibom and Cross River states, Sister Winifred Wonodi, said that the purpose of the dinner for the Media Executives was to express appreciation for their past collaboration in reporting the activities of the Church, to sue for greater cooperation in future especially during the April 2021 General Conference of the Church during the Easter.

Also speaking, the Welfare and Self-Reliance Manager of the Church for Cross River and Akwa Ibom States, Brother Christian Onovughe, presented to the media executives development activities of the Church in Cross River for the past years outside the year 2020 which the global pandemic prevented the Church from embarking on such projects like the All-African Service project, but however provided relief materials to members and non-members during the pandemic in 2020.

He listed some of the Church Service Projects carried out in Cross River state to include LDS Charities, 48 computers to Cross River College of Education, Awe in Akamkpa, All-African Service Projects at Watt Market,, Atakpa Police Station, Calabar road by Goldie junction and at the University of Calabar Teaching Hospital {UCTH}, among others.

Brother Onovughe disclosed that The Church of Jesus Christ of latter-Day Saints places much emphasis on communities based on the need to give back to our communities and the importance of bring up our children in the right way asserting that the Church teaches members correct principles and allow them to govern themselves.

The Commissioner for Information and Orientation, Comrade Asu Okang, lauded the church for placing greater emphasis on the ethical and moral upbringing of children, youths and single adults who are tomorrow’s future of the Church.

Comrade Okang who was represented at the event by the Permanent Secretary of the Ministry, Mr. Thomas Ebong said he is highly impressed with the activities of the Church in the state for the past years as shown and explained by the representatives of the Church at the event, maintaining that the essence of any Church should be the moral and social development of the people.

The Information and Orientation Commissioner asserted that the activities of The Church of Jesus Christ of Latter-day Saints aimed at moral upbringing of our children as well as the development of our communities through siting of projects and amenities that makes life meaningful to the people are laudable initiatives which should be encouraged by the society, stressing that helping to build moral rectitude in our children is helping to ensure a better future for us, our children and the world.

Speaking earlier and later in an interview with the media, the Chairman of the Port Harcourt/Uyo Area Coordinating Council of the Church, Elder Jerat Kennedy Chukwuemeka Igwe, disclosed that in the past years the Church has been involved in humanitarian and development oriented activities for communities in Cross River State.

Elder Igwe who was represented at the occasion by the Stake President of Calabar Nigeria Stake President, President Ephraim Ebong revealed that The Church of Jesus Christ of Latter-day Saints places greater attention when it comes to rendering of humanitarian services under the LDS Charities, provision of relief materials to natural and other disasters ridded areas as well as carrying out service projects under the All-African Service project is hinged on the Church belief that “when we are in the service of our fellow human beings, we are only in the service of our God.”

He said that The Church of Jesus Christ of Latter-day Saints is a family centred Church that recognizes the central place of the family in Gods plan of Salvation for His children, bearing in mind that once the family is fixed and completely intact then the society will be fully secured now and in the future.

Media executives who attended the dinner were drawn from government, print, electronic and online media.