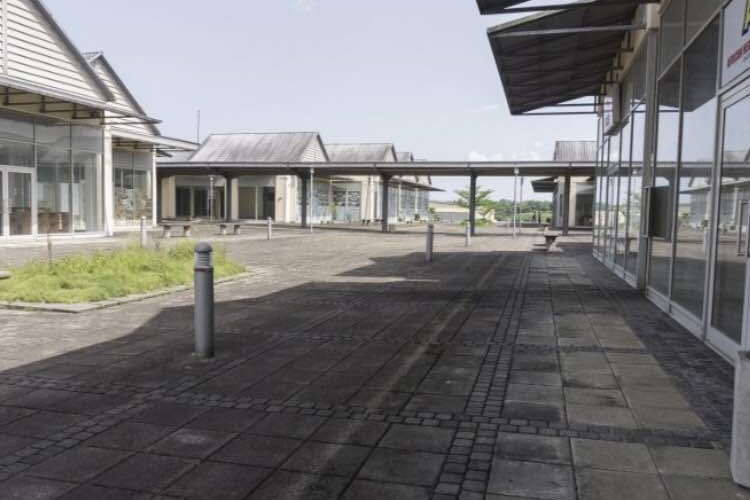 THE DECAYING INFRASTRUCTURE AT TINAPA

When the Tinapa Resort was constructed over a decade ago by the Donald Duke administration, the sprawling 80,000 square metres resort held a great prospect as a dollar-spinning commercial hub in West Africa. It was one of the signature projects of the Duke administration and he flaunted it everywhere. It was commissioned in the twilight of his administration in 2007 and became the pride of Cross River State and a tourist delight.

It had a futuristic film studio that was to attract Nollywood stars, exquisite luxury shops, mono rail system and other world class facilities that made it a place to be for leisure and business. It was to be a one-stop shopping resort like malls in Dubai in the UAE. Tinapa was meant to attract shoppers and entrepreneurs from West Africa and even other parts of Africa who go to Dubai to do business. It was to engender economic development and create thousands of jobs. Financed by some of the big banks in the country, no expenses were spared in the construction of the resort. As a free trade zone, it was to attract a lot businesses. Its envisaged economic benefits were numerous.

Two years after it was commissioned, the vision with which it was conceived had begun to yield dividends. Bassey Ndem, a former managing director of Tinapa once revealed that in 2009, the resort had generated $30 million  However, no sooner had this modest achievement been recorded than several spanners were thrown into the works by many forces beyond the control of the state government.

And the decline of the resort inexorably set in. The major culprits responsible for the sordid events that culminated in the abysmal collapse of Tinapa were the customs who were accused by Ndem of preventing the tax-free trade zone from working, thus paralyzing businesses there. They disallowed containers shipping goods to Tinapa from berthing at the Calabar port. And cutting off such a vital supply chain to the resort sounded the death knell for Tinapa. It was just a matter of time before everyone came to terms with the ugly manifestation of the abandonment of Tinapa which is the progressive decline it has witnessed to date.

Apart from the spoiler’s role customs played in the collapse of the resort, the inaccessibility of the Calabar port to big vessels, poor infrastructure such as bad roads that prevented goods from being evacuated also contributed to the rapid decline of Tinapa.

All these gaps should have been painstakingly taken into consideration in the course of the construction. That oversight was like putting the cart before the horse. Though there was need for a deep seaport, the dredging of the Calabar channel for large ships to berth was not carried out even after the federal government had awarded a contract for it. However, the federal government failed to offer a helping hand by proving the infrastructure and enabling environment for business to thrive there. The resort has not been able to recover from that in spite of efforts by the former Governor Liyel Imoke government to revive the place.

Of all the facilities there, only the 242-room Lakeside Hotel is functioning. The proximity of the Calabar International Convention Centre (CICC) to Tinapa was expected to complement the resort in terms of patronage. But that is not the case. All the shops except one are shut because of lack of patronage. One of the closed shops in the emporium is currently being used as a conference hall.

This is worrisome to us. Allowing Tinapa to lie prostrate as a white elephant project is not good for the image and the economy of Cross River State. It is disheartening that having spent billions of naira on the project, it now stands as a sore thumb in the landscape of the state capital.

Now that Tinapa has been reduced to this sorry state, we believe that Governor Ben Ayade can muster the necessary political will to revive the resort. It is even more urgent to do so as the state is bending over backwards to repay the hefty loans obtained from banks to construct the resort. The loans are being deducted at source from the meagre monthly federal allocations to the state. It does not make any economic sense paying back loans for a project that is not yielding any revenue for the government. New investors could be attracted to the resort by creating a conducive business environment there. Since the governor says his government is interested in attracting investors to the state, he should find a way of reviving Tinapa and making it a major business hub in the sub-region as it was originally conceived.

Whatever were the grey areas that allowed the customs undermine Tinapa’s survival should be addressed holistically to avoid the mistakes of the past that brought the resort down on its knees. Since Tinapa was conceived to create employment for thousands of people, allowing it to slip into a colossal monument of waste will not speak well of the government of the state which boasts about tourism as one of its main pillars of economic revival of the state.

Government is a continuum. We expect Ayade to see it in that light and do whatever it takes to revive Tinapa. It must be put back on track. The glory will not only go to Duke or Imoke but Ayade also, if the fortune of the resort is made to rebound again and sustained. Tinapa must not be allowed to degenerate further.