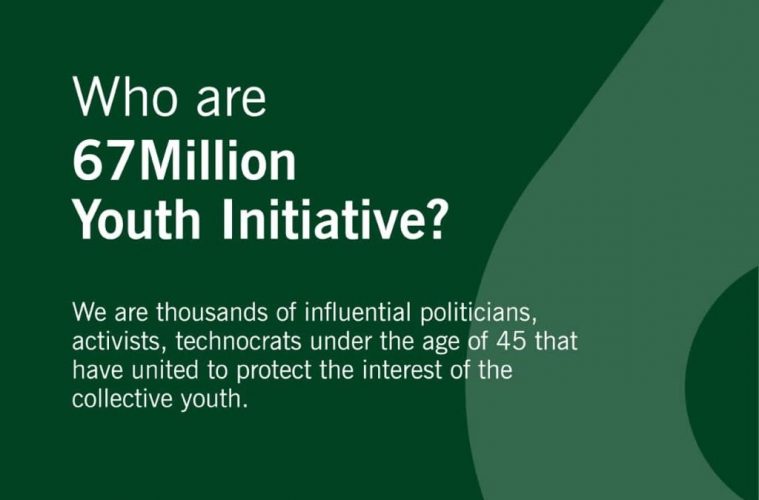 Our attention has been brought to the negative posts on social media about The 67Million Youth Initiative. As the originators of the initiative we owe it to all the delegates that we come forward and set the record straight for the brave delegates that believe in this initiative and signed their names on it.

Many of our delegates have received backlash from the misinformed and agitators on social media. These delegates have put their reputations on the line for this cause and it is now time we bring our selves forward and face any consequence alongside the other delegates.
Seven of us initially came together to start this initiative: Maryam Laushi (founding member of Not-To-Young-ToRun); Asuquo Ekpenyoung (PDP Commissioner of Finance for Cross River)’ Mohammad Sani Abdullahi (APC Commissioner of Budget and Planning for Kaduna State); Mark Okoye (APGA Commissioner of Budget and Planning for Anambra State); Adebola Williams (Co-founder of RED); Moji Rhodes (First female deputy Chief of Staff for Lagos State); and Luqman Edu (CEO FilmoRealty). As young progressive leaders we purposefully chose to build an initiative that cuts across party lines, religions, and ethnic backgrounds.
We jointly signed up to the following guidelines so that the initiative could not be hijacked for ulterior motives. We agreed on the following:
1. OUR VISION—To advance Nigeria with a new generation of leaders at all levels of politics and government
2. OUR MISSION—To build/organise and leverage on the block vote for the interest of the collective youth
3. GUIDING PRINCIPLES FOR 2018/2019
a. 67Million will NOT support or make any endorsement for the presidential or governorship races in 2019.
b. We will focus on getting as many young people APPOINTED into various positions in their states and on the national level.
c. We shall support the emergence and success of young candidates across ALL platforms and will particularly endorse our members that are running for state and national assemblies, and local government positions across party lines. Furthermore, we agreed that all major decisions and activities will be decided through a democratic voting process by delegate members.
Once we reached a consensus, EACH trustee convinced 15 people to join this initiative as delegates. A lot of attention has been put on the Muslim APC delegates but if you carefully go through the delegate list you will find delegates from cross-section of political parties, faith, and tribes. To date, the initiative has only been funded by delegates and supporters that have donated between 10,000 to 1 million naira.
We admit to some mistakes such as engaging a media consultant who proceeded to acquire an existing twitter handle without doing proper vetting, we knew of the plan but not what the account was used for in 2015—this is indefensible. We shall meet three different kinds of people in this journey; people that will never believe or support us, people that will buy into what we are trying to do, and people in the middle that will have an open enough mind to make decisions with the information presented to them. The truth is on our side, so we shall only focus on the last two.
As for the first set, we say to them, “CARRY GO!”. We shall continue with this initiative and endeavour to accomplish the mission we have all come together for. We know that this task shall be hard and there shall be resistance from people that will not want the youth united, the youth should not be distracted and together we should forge on.
We invite all youth to join us by registering on our website: www.67million.ng
Join the Conversation!