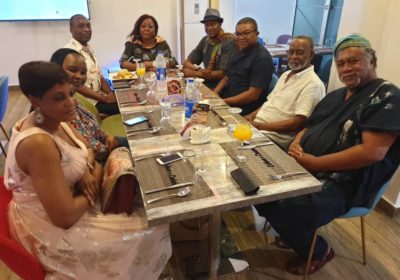 TOURISM: CARNIVAL CALABAR DISCUSSES COLLABORATION WITH THE OONI OF IFE REPRESENTATIVE AND THE TORONTO CARIBBEAN CARNIVAL

Carnival Calabar Team met with the Representatives of the Ooni of Ife and the team From Toronto Caribbean Carnival.

The meeting was held at the Echoes of Calabar Restaurant in Victoria island Lagos where discussions were held on the Possible Collaboration between His Majesty Who is the Patron of the Canadian Festival the Carnival Calabar and the Toronto Caribbean Carnival.

Areas of Collaboration were discussed and details agreed on Synergies between the groups.
According Senator Ita Giwa ” Our Carnival is one of the most innovative in the World built on Choreography and Contemporary African Music and Dance and has become an attraction to other festivals. We are happy with the meeting and will see common grounds for Collaboration”