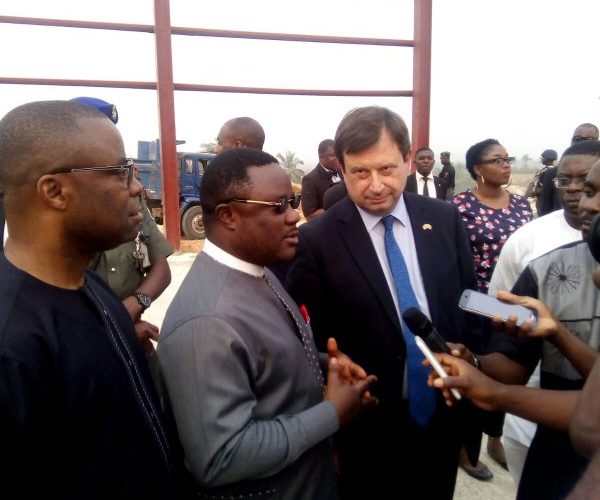 Ahead of its March date commissioning, the British government has expressed its readiness to train the needed manpower for the take off of the Calabar Garment factory.

British High Commissioner to Nigeria, Mr. Paul Arkwright disclosed this while on an inspection of ongoing work at the project site.

The envoy whose country is known for great expertise in garment making, especially in embroidery, lauded the effort of Governor Ben Ayade in initiating the project, maintaining that he would be willing to bring in expertrates from Britain to train its workforce in some critical areas of textile making to build the needed capacity and create the desired jobs.

The High Commissioner said the factory holds huge employment opportunities that could be translated into enormous wealth creation amongst youths.

In his words: “Like I told the governor, when we met in his office, we are working on details of how to move in as quickly as possible to kickstart the training, by bringing in expertise.” He stressed that it was a right signal that the UK was really engaged with Nigeria.

Arkwright who had earlier paid a courtesy call on the governor in his office said he was visiting the state for the first time, adding that he had been talking to governor Ayade about the UK helping in creating employment opportunities and growth through aggressive entrepreneurship training programmes. He promised to sustain Britain’s cordial relationship with the state.

Responding, Cross River State Governor, Professor Ben Ayade who had earlier received the delegation in his office, informed Arkwright of his administration’s signature projects, with an urgent focus on the garment factory. He noted that the United Kingdom was renowned for its embroidery. “The partnership with the UK is one we are going for excellent and first class expertise. This is a strong partnership and we are hopeful that with strong commitments on training and guaranteed technical competence, Nigeria can maximise her potential on the garment sub’sector of the economy

“The message for Africans is that Britain, finally, is all out here to start doing business.” Governor Ayade and Arkwright earlier exchanged gifts at the government house, Calabar.‎

Also, while in Calabar, Mr. Paul Artwright hosted a cocktail reception to mark the end of the first British Council Creative Cities workshop in Calabar which held from February 1st to February 5th 2016 at Transcorp Hotels, Calabar.

Fifty (50) Cross River State residents where selected for a free training programme aimed at strengthening their skills and capacity for current and future cultural events management to create employment for the youth and contribute to the creative economy of the state.