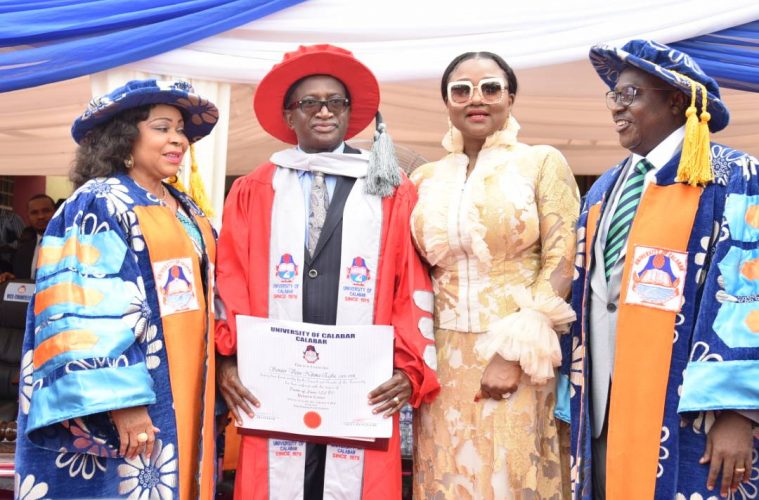 The Chairman of the Niger Delta Development Commission, NDDC, Governing Board, Senator Victor Ndoma-Egba, has emphasised the need for adequate funding of university education in the country.

Senator Ndoma-Egba spoke during the 31st Convocation Ceremony of the University of Calabar, UNICAL, where he was conferred with Doctor of Laws, (Honoris Causa). Other awardees were the Emir of Borgu Kingdom (Niger State), Barr. Muhammad Sani Haliru Kitoro, who was awarded an honorary doctorate degree in Business Administration, and the Late Chief Michael Archibong, who was given a posthumous honorary doctorate degree.

The NDDC Chairman, who responded on behalf of the awardees, expressed gratitude to the university authorities for finding them worthy of the honour. He declared: “While we celebrate excellence, it is also an opportunity to reflect on certain issues of the moment, one of which is the state of education in our country.

Senator Ndoma-Egba lamented that funding constraints had hindered education in Nigeria, stating that many public universities were in various stages of decay on account of poor funding. He observed that funding of universities had consistently fallen short of the 26 per cent of the total national budget recommended by the United Nations Educational, Scientific and Cultural Organisation, UNESCO. He regretted that between 2003 and 2014, education funding had fluctuated between 8.2 per cent and10 per cent, a situation he described as dissatisfactory. He said that as we move into the future, education must be visionary and innovative. “We must not just fund education. It must be funded adequately as it remains the bedrock of our future,” he declared.

Senator Ndoma-Egba noted that between 1980 and 2017, the number of recognised universities in the country grew from 16 to 152, adding that “for the first part of the growth, higher education capacity building was primarily in the public sector, driven by federal and state governments. By late 1990s, the Federal Government had liberalised and encouraged the setting up of private universities. This resulted in a dramatic growth in the number of private universities.”

The NDDC Chairman assured the authorities of UNICAL that the three beneficiaries of the honorary doctorate degrees would continue to contribute to the growth and development of the university to ensure that it was able to prepare its students for the future. He also pledged to step up his sponsorship of the Faculty of Law building in the university, declaring: “It will be completed, furnished and provided with a state-of-the-art E-library.

He further made a commitment that all NDDC projects in the university would be completed within a reasonable time.

Speaking at the occasion, the Vice Chancellor, Prof Zana Akpagu, said the awardees were selected based on their positive contributions to the society and for  their supports to academic excellence in the institution in particular, and the country in general.

Akpagu disclosed that while Ndoma-Egba had contributed immensely to the growth of the law faculty in the University, the late Archibong would always be remembered for donating a clinical hostel to medical students of the university in the early 80s. The convocation ceremony witnessed the award of degrees to 11, 807 graduands in their various fields with 42 of them emerging with 1st class. A breakdown shows that 7957 earned 1st degrees, 1,624 Diplomas and 2226 Post-graduate degrees.

The Vice Chancellor urged the graduands to be innovative so as to make a difference in the society. He said: “We have also established an innovators’ and entrepreneurs’ club to encourage and enthrone the start-up culture of innovativeness as the way forward for Nigeria’s development.”

The Pro-Chancellor and Chairman of the Governing Council, Senator Nkechi Nwaogwu, stated that the university was being repositioned for greater involvement in, and compliance with the tradition of fulfilling the global universities’ mandate of teaching, research and community service. She said that the Governing Council would pursue a deliberate policy of expanding access to qualitative and affordable university education for the creation of relevant skills for national development and global competitiveness.