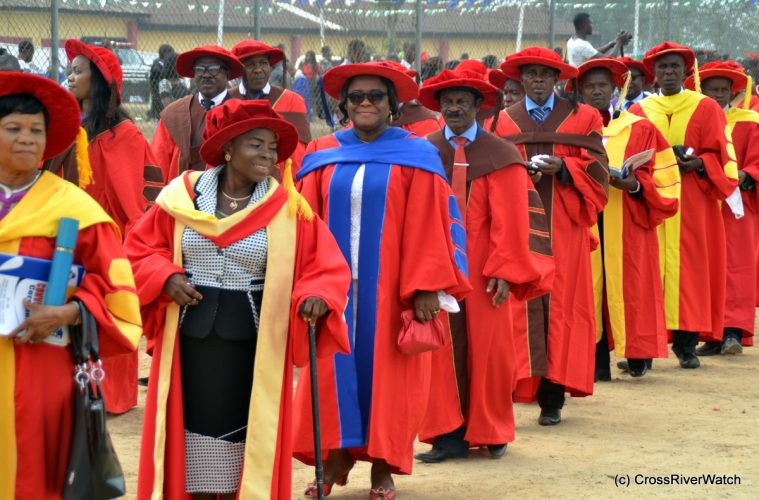 The University of Calabar (UNICAL) has urged it’s graduands to be innovative by taking advantage of every available opportunity in life.

Vice Chancellor of UNICAL, Professor Zana Akpagu, who made the call, commended the travails of the young graduates in the current economic environment.

Professor Akpagu made the remarks during the institution’s 30th convocation ceremony held on Saturday at the Abraham Stadium at the University premises in Calabar, Cross River State.

Addressing the graduands, the Vice Chancellor urged them not to be defined by their present educational attainment, but by how they survived adversity following the present economic state.

“As young as this administration is, it has already established the faculties of Dentistry, Engineering and Pharmacy.

“These three facilities are capital intensive and require enormous resources in terms of human capacity and infrastructure for effective take off.

“New departments have also been created, they are: Music, Fine and Applied Arts, Mass Communication, Tourism and Hospitality Management, and Food Science and Technology,” the Vice Chancellor noted.

The University of Calabar successfully graduated a total of 13,347 graduates which include 1,437 were awarded post graduate certificates while 11,910 bagged first degree certificates in different classes out of which 22 earned first class honours degrees.

High point of the ceremony was the award of honorary degrees and the foundation stone laying of the proposed site for an ultra-modern medical centre which is estimated at five billion Naira.

The occasion was attended by Governors of Abia and Sokoto states, as well as other top dignitaries.