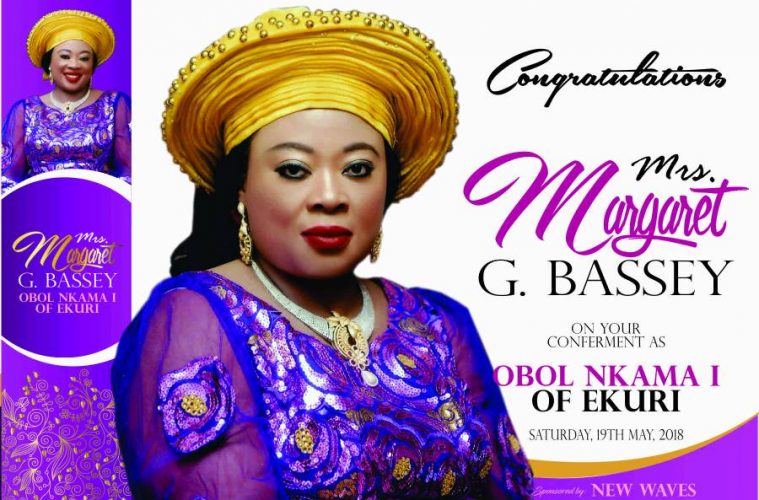 WHAT A MAN CANNOT DO A WOMAN CAN DO BEST: CHIEF MRS. MARGARET BASSEY, OBOL NKAMA I OF EKORI

In my community Ekori there’s a WOMAN, a high flyer, a woman who’s changing the narratives, touching the lives of many both young and old and turning around the fortunes of my community, a woman boldly making statements by the developmental strides being undertaken by her in the community, a woman whom by her benevolence and great impact she is creating has simply and outrightly made nonsense of an elected leader whose mandate was and is to steer the community, constituency and constituents alike to greatness.

But for 20 years running we longed for, anticipated, hoped for at least a single project to be completed but never saw it coming. But for this woman, the Ekori Police post would have sank to the ground. But today she has given it a modern and fascinating facelift. But for this woman a lot of poor families in the community would have gone hungry, it is common knowledge that one family gets like 2 to 3 bags of rice at a go. Not to mention fabrics. But for this woman, a lot of jobless and ‘Lazy’ youths would have still been roaming aimlessly in the community waiting for the due time for them to be empowered and armed with Pump Action rifles to cause crisis in the community. But she has steamed the tide of restiveness by providing hundreds of sewing machines, motorbikes and engaging others in various skills of their choice.

This WOMAN has changed the popular cliché of “What a man can do”… to now, in this case scenerio “WHAT A MAN CANNOT DO, a WOMAN can do it best”. This WOMAN, my friends she’s to be honored with a chieftaincy title first of its kind in my community on the 19th of May, 2018 For the people who have thought it worthy to confer her with a chieftaincy title, I commend them, it is most deserving. She merits it 100%.

Fillers reaching me says rice and stew will be very plenty in all the streets of Ekori, that to every street there’s a giant cow on hand for that event. That the community is agog following preparations towards that day. Like it’s going to be a carnival of some sort. That people have even termed that day EKORI DAY.

In of these all, I got thinking and asking, what will it take a politically elected leader to do same and more, reaching out to people one way or another and just creating an enabling environment and opportunities for people to maximize their potentials and thrive? What will it take to win and warm the hearts of your people so they are drawn to you? Why so much greed amongst our elected political leaders when a lot of resources are open to them? Methinks doing what they ought to do for their people won’t stop them from enriching themselves or cause them to be less of what their status portrays. This mentality of politicians of ‘me only’ ought not to be so.

Sometimes I wonder if politics takes away the humaneness of an individual. Elected Politicians make una dey fear God ooo…

Having endeared herself in the hearts of many, i pray may her source never run dry as she continue to do more for her community and her people without bias.