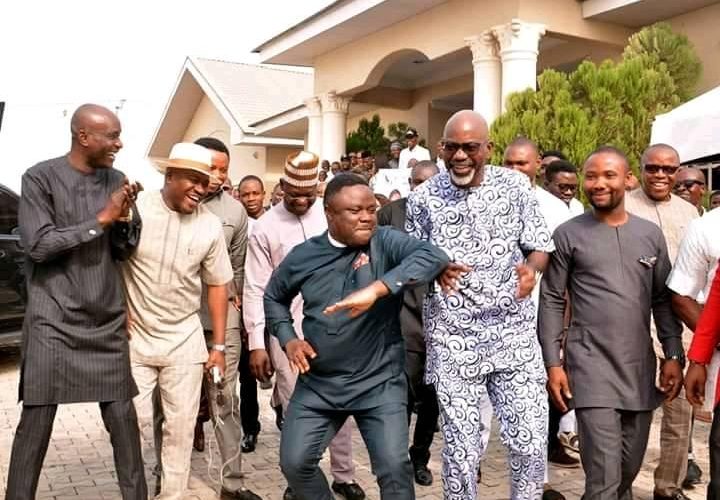 Cross River Governor, Senator Ben Ayade on Monday was welcomed to the Itigidi in Abi local government area residence of his predecessor, Senator Liyel Imoke with supporters rallying round him chanting “digital.”

That was Mr. Ayade’s second visit in almost three years in office to Mr. Imoke’s residence in Itigidi with the first coming in January 1, 2016. Ayade who arrived at about 4:00PM, said his visit was to felicitate with his predecessor who has always hosted family, friends, associates among others every January 1 long before he ventured into politics.

“Anybody who understands the politics of Cross River and knows the significance of today, will know that first January is a day set aside to honor Imoke, to show him that we are the same family and that the political family is perfectly intact,” said Ayade while fielding questions from newsmen. Continuing, he averred that: “It shows there are no cracks, no crisis, no skirmishes in the family. We remain one and indivisible entity as we have always been known, in the PDP family of Cross River state.”

Mr. Imoke in his comments commended Mr. Ayade for his “understanding” and “humility.”

“For honoring this day, it shows Ayade’s depth of humility, a sign of respect and indication of his commitment to the political family,” Imoke said.

And, in what appear to be a line at Ayade in reference to his proposed spending estimates for 2018, Imoke further added that: “This gesture truly explains his (Ayade) understanding and we thank him. 2018 is a great year that we will crystallize the kinetics.”

The Governor was accompanied by the speaker of the House of Assembly, Mr. John Lebo and several government functionaries.

Earlier reported by a source, Imoke had met with Senator John Owan-Enoh, Paul Adah and Okoi Obono-Obla behind closed doors before he emerged and said that it was not a political meeting. He later went on to advise politicians to put the people first in all their dealings as they are the essence of politics.