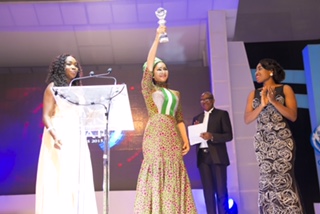 Former Governor of Lagos state and National leader of the All Progressive Congress, Bola Ahmed Tinubu received the ‘Extraordinary Man of the Year 2015’ award as he was nominated alongside the first chartered accountant in Nigeria, Chief Akintola Williams.

These radiant ladies were indeed humbled by the opportunity of sharing and speaking on same stage with these impeccable political figures who have made history in Nigeria.