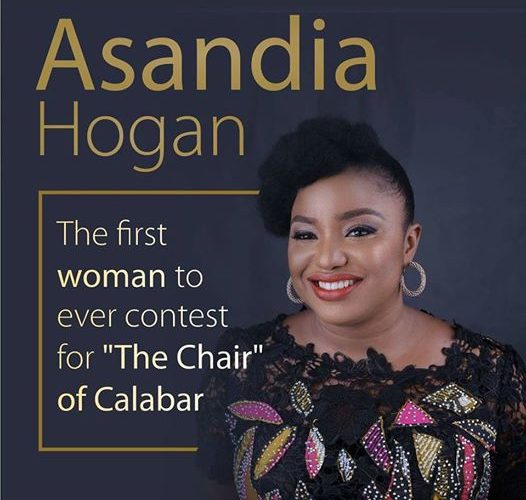 Asandia Bassey Asuquo Hogan is a business woman who is contesting for the Mayor of The Calabar Municipality under the PDP. If she wins the election, she will become the first woman to be elected into this office.

In this interview with Today’s Woman, Asandia takes us into her world, from her experience growing up to her journey into politics.

Enjoy the interview below;

My parents always showed me that I could do whatever I wanted as long as I put my mind to it. I never felt limited. As an Efik female, I grew up in a matrilineal environment where women were encouraged to be outspoken, expressive and bold. We aren’t brought up to be shrinking violets. My father hated injustice so I suppose I’ve followed in his footsteps.

I guess the apple never really falls far from the tree. I’ve always been interested in politics, governance and history (my best subjects in secondary school). I used to read Newswatch with my dad as a kid and listen to him discuss politics with his friends. When he passed, I started discussing it with my mom especially Gani Fawehenmi. I loved Gani, he reminded me of my father. He was locked up by the military juntas like my dad so I connected with him. He was fearless. I admired how he always took on the establishment and always stood on the side of truth. I guess both my parents, not just my mom affected my choice to run for office.

I wanted to be a Lawyer for as long as I can remember. But I can be impatient. I saw family and friends studying Law and reading all the time. I realized I wasn’t ready to dedicate that much time to reading at that point in my life (maybe later). I’d always been good at publicity from Nursery/Primary to Secondary school and could sell sand to the Arabs. So I did my A levels in Media, Marketing and Sociology. Then I lost my mom that summer and my world crumbled. Truth is I had started a degree in Fashion Promotion that September but I couldn’t focus, I was lost without my mother and needed time to grieve and figure out a life without her so I ‘dropped out’. 3 years later, after throwing myself into full time work and scaring all my family that I won’t go back to University because I was earning more than my age, I went back, without any cajoling. I had figured out how to cope daily. I found the perfect degree I’d been looking for inside London (I didn’t want to school outside London). I guess all things work together for all those who love God.

4. Did you ever work in any establishment before venturing into business?

Lol, my first job as a 17 year old in London was a checkout assistant in Waitrose. I’ve worked all sorts of jobs from waitressing, to door to door selling, retail assistant, shop manager, office assistant, receptionist, PA, company secretary, recruitment consultant, executive officer, national editor of a magazine etc. My longest job was with the Metropolitan Police in London for 6 years where I had several roles like Executive officer, PR assistant, training manager, HR assistant etc. I ran my mom’s restaurant during the holiday from when I turned 15 also. I believe that there’s dignity in labour.

In 2009 after I’d been back to Nigeria for about a year, I started getting frustrated and disillusioned by the system. I wanted things to change and I came to the realization that I’d have to create that change from inside. It wasn’t good enough being an armchair critic, why couldn’t I be part of the solution I asked myself? I knew I had big shoes to fill especially my mother’s politically so I decided to go from the bottom up. It was the only way I knew to do politics – to be a grass rooter even if you were considered an elite. That’s what my mom did, that’s who she was and that’s what I learnt from her. I contested for councillorship of my Ward in 2010, I was disqualified on the morning of my election for being underage (you have to be 30 and above to be a councillor in Cross River State). I stayed on and continued working for the party. From then on I knew I had to be in governance because of my dissatisfaction with the polity.

Why now? Why not now? Calabar Municipality politics needs an overhaul. We need a breath of fresh air. We need inclusiveness. We cannot continue to exclude folks from getting the dividends of democracy and expect progress. The status quo needs to change, the world is too advanced and yes it’s a global village but we cannot let our local government be run by villagers. I have the dynamism required to handle the local politics yet articulate our positives to the world and attract them to us. It complements the governor’s effort. I can create Internally Generated Revenue (IGR) to support the effort of the state government rather than sit and wait for allocation. Calabar Municipality needs someone who will think outside of the box in these dire economic times hence we need a game-changer in the person of me.

I am a very confident person. I do not go into things I do not think will be fruitful. Politics is a gamble no doubt with lots of interests and intrigues. However I have no doubt whatsoever in my mind that I am the best suited person for this job and that is not because I’m a female but because I know I have the intellectual capacity as well as the political pedigree and following to deliver the dividends of democracy to my people. As a woman, we unfortunately have to work twice as hard to show what is ordinarily taken for granted for men so I am as focused and dogged as they come. You see other than England, I’ve lived most of my life in Calabar. I am a Calabar girl through and through, unapologetically so. I want to serve my people, clichéd as that sounds.

The terrain is becoming more mature but at the same time it feels like we’re stuck. More mature because there’s the internet and information is at our fingertips now but stuck because it seems corruption is rife with all these monies being discovered everywhere. Politics all over the world seems harsher for women than men, just look at what happened in America. We need to create an enabling environment that encourages women to venture into politics. We are seeking for gender equity not equality. We are different and have somewhat differing needs hence we need to accommodate and help each other. However, I keep saying integrity has no gender. If you do your politics with integrity you will win even if you don’t “win”.

Lol…I always find this question interesting. I cannot imagine that if my husband was running this campaign, he’d be asked as a husband and father are you prepared for the disruptions this may cause in your family life? I think it goes without saying that I have a very supportive husband who doesn’t see me as just a wife and a mother, but as an individual who had/ has dreams and aspirations and being a mother and wife doesn’t and shouldn’t stop one from pursuing those dreams. As a couple, we work around each other and plan our lives to fit in with our family as much as possible. As a mother I naturally feel guilty when I’m away from my son, but I also know I’m teaching my son a valuable lesson about how to treat women. I need him to not be afraid or intimidated by ambitious women. He needs to know that his Mrs as much as she’s his wife and the mother of his children, she’s a human in her own right too. I can never say I’m running this election because of my son, no, I’m running because of me. I want to fulfill my dreams and in doing that I will be the best me that I can possibly be which in turn is a better and happier mommy. In feeling fulfilled, I present a better mother to my boys.

How high is the sky? Lol. I will climb to the top and as far as I can get. I don’t do things in half measures. My mother always said there’s no harm in trying. My husband says just do it, gain the experience and do better next time. He also says try and try again and die trying.

I would want a few things but my priority would be quality representation devoid of ethnic, religious or any other bias. Because with that a lot would fall into place and the other things I want would naturally follow. And that is have more women, especially young women involved in governance. It’s as if femininity and governance are at loggerheads. I wish we focused on substance than on peripheral things.