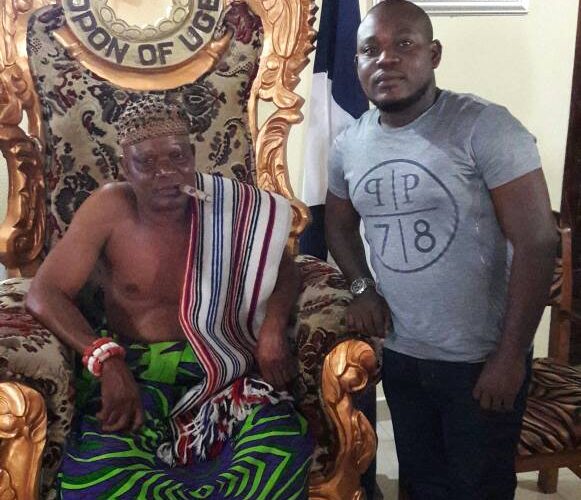 Online Journalists practising in Cross River State have been commended for enduring tasking and risky environments to report happenings in the state and sensitize residents.

The commendation was given by the Paramount Ruler of Yakurr, Obol Ofem Ubana and the Obol Lopon of Mkpani, Obol Obono Okoi when some members and the Board of Trustees of the Association of Cross River Online Journalists visited their palaces Monday in Ugep and Mkpani respectively.

Obol Ofem who is also the Obol Lopon of Ugep said that he had been working tirelessly to ensure that there is peace in Ugep since he assumed the throne as many had feared that with recent happenings, the town will not be safe for tourist during the New Yam festival tagged ‘Leboku’ and commended the journalist for reporting happenings in his community.

“I am working tirelessly to ensure that there is peace in my community.

“Many people were afraid of coming for this year’s Leboku festival because of the recent gangster war in my community, but presently there is peace.

“As you can see, sons and daughters of the land, tourists and many visitors are here to celebrate this year Leboku new yam festival with us,” said Obol Ofem.

He also mentioned a particular gangstar that is terrorising his community and called on the Police to arrest him.

He said: “Arikpo 007 is one of the gangstars that is terrorising my community. I have declared him wanted.

“The police need to arrest him. He is presently running from one bush to another with his fellow gang members,” said Obol Ofem. Some members of the Association of Cross River Online Journalists (ACROJ) pose for a photograph with the Paramount Ruler of Yakurr and Obol Lopon of Ugep, Obol Ofem Ubana (M) and the SSA to Governor Ben Ayade on Creative and Knowledge Economy, Honorable Emmanuel Etim (1R) during a visit to the palace of the Obol.

In a related develipment, Obol Obono of Mkpani lauded online media practitioners for working in risky environments to inform the public and government of communal clashes in the state and charged them to be objective in their reportage.

“We appreciate Cross River State government efforts in containing peace and security in the Yakurr communities.

“Normalcy is gradually returning but the best way to stop communal clashes among communities is by dialogue not war. War is not good.

“I will like to use this medium to advice other communities not to engage in war,” said Obol Obono. Some members of the Association of Cross River Online Journalists (ACROJ) pose for a photograph with the Obol Lopon of Mkpanj, Obol Obono Okoi (M) and the SSA to Governor Ben Ayade on Creative and Knowledge Economy, Honorable Emmanuel Etim (1L) during a visit to the palace of the Obol.

Earlier, CrossRiverWatch Editor-in-Chief, Mr. Agba Jalingo pleaded for support and cooperation from the monarchs to enhance the working conditions of journalists in their communities.

Mr. Jalingo also commended the traditional institutions for its contributions to security and development of communities.

The delegation was led by the acting Chairman of ACROj and Publisher of CalabarBlog, Mr. Hope Obeten.