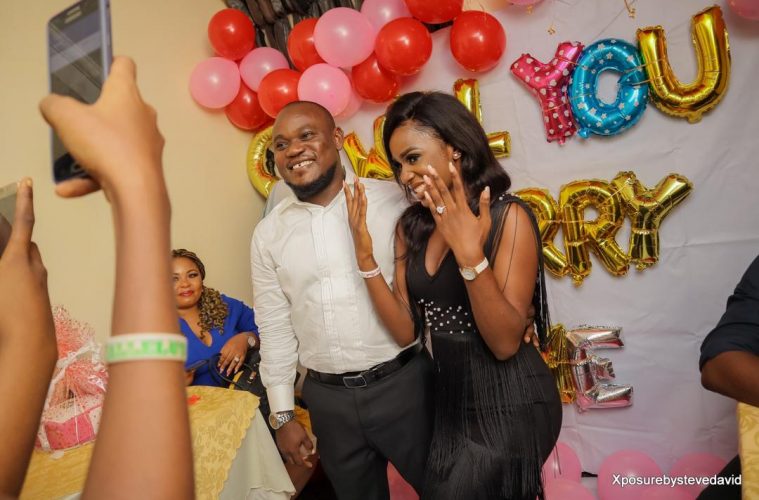 YOU WERE WORTH WAITING FOR: CALABAR BLOG CEO, HOPE OBETEN ENGAGED TO GIRLFRIEND, MINA ATAMBI

It was a moment of joy and love in the air, as Media Entrepreneur and Calabar Blog CEO, Hope Obeten finally took a bow out of bachelorhood as he engaged his heartthrob, Mina Atambi.

The ceremony which held on Friday night at the palatial Calabar Harbour Hotel and Resort, Calabar had only close friends and family in attendance.

The entire social media has been agog with good wishes for the lovebirds who finally decided to be officially known with the hashtag #BecomingMrsHopeObeten already trending.

And @hopeobeten had also taken to his official Facebook Page, (Hope Obeten) to spell out some loving and romantic words for his would be wife, @mina_atambi

“You were worth waiting for.

“You give me peace and make me better.

“May this love keep us together forever.”

Read Full Gist Of How It All Happened: From the Master Planner; Victoria Angel Ana:

“Yesterday was so beautiful…..

So @mina_atambi had no idea that @hopeobeten was going to propose, it was her birthday and she thought he was out of town for work, unknown to her that he was around and  we had planned a surprise proposal.

Funny thing is she had plans for her birthday and I played along ….On our way to her pre planned party which by the way we had intercepted without her knowledge and redirected everyone she invited to the surprise proposal venue,  I told her to please give me a few minutes to pick somebody , she graciously  followed me to the venue and Viola! Her Prince charming @hopeobeten was waiting for her with the most beautiful  diamond ring I’ve seen in this part of the world. Like i took one look at the size of the rock and I knew that virtue has left my brother…lol…. it was such a beautiful and emotional experience, we all literary cried especially when her mum started crying .

I gave a toast for the soon to be couple,and conducted the cutting of the cake, the way my belle was sweeting me eh, i swear I had butterflies in there…. Genuine love is such a beautiful thing and I’m super excited for this couple.

I’m rooting for them all the way…. Plus the turn up for this wedding will be legendary.

They will both tie the nuptial nut at a date to be announced soon.

So, get your dancing shoes and starched shirt ready!

Plus we can’t wait for the Aseobi and Naija Jollof…

The entire Calabar Blog Team wishes them the best in their marriage endeavor.