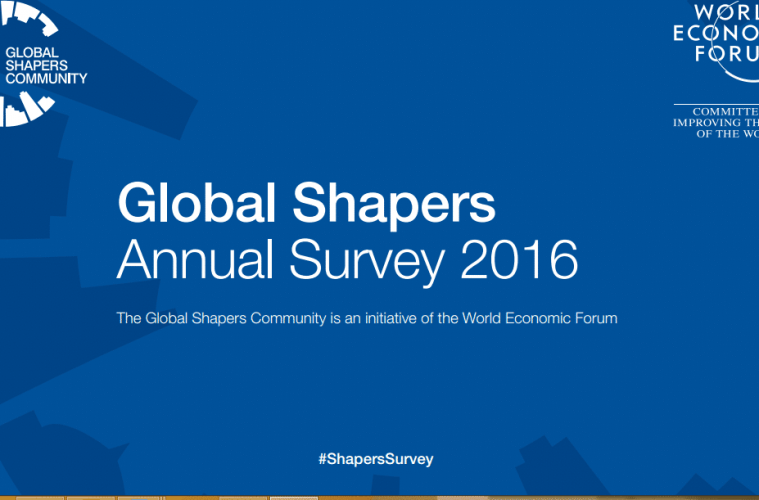 YOUTH EXPRESS OPTIMISM ABOUT THE FUTURE, PROCLAIM SENSE OF UNITY AMIDST CONCERN FOR CORRUPTION AND CLIMATE CHANGE ACCORDING TO #SHAPERSSURVEY

Calabar, Nigeria. 19 September 2016 – Young people are optimistic about the future: of the respondents to the Global Shapers Annual Survey 2016, 70% see the world as full of opportunities and about 50% believe they can actively contribute to decision-making in their countries.

“Young people are saying that to make the world a better place, we have to improve it for everyone, not just a few. We have a shared destiny, and while we are optimistic about the future, we must be diligent: we will only arrive there by operating with integrity, openness and transparency, and by being action-oriented. Finally, young people overwhelmingly believe that it is possible,” said Yemi Babington-Ashaye, Head of the Global Shapers Community and Director at the World Economic Forum.

The Global Shapers Annual Survey 2016 (#ShapersSurvey) was launched by the World Economic Forum and the report is available at: www.shaperssurvey.org. It offers unprecedented insights into the thinking, priorities and concerns of young people around the world. The Survey was designed and produced by the Global Shapers Community with more than 6,000 members in 171 countries and territories. More than 26,500 participants from 187 countries and territories answered the Shapers Survey in nine languages.

The biggest global and local challenges

Across all regions, young people see corruption and a lack of government accountability as the most pressing problem in their countries. Other major concerns are unemployment / lack of economic opportunity and lack of education and also poverty.

At the global level, for the second year in a row, youth see climate change as the most serious issue affecting the world, followed by large-scale conflicts, religious conflicts and poverty.

A sense of unity that transcends borders and religionWhen asked who gives them confidence that these challenges can be solved locally and globally: young people have more confidence in themselves than any other stakeholder or institution. There was high confidence in international organisations (92%) to solve global issues.

The most popular response to the question about how young people identify themselves is as “Global Citizens”, with 36% of responses and it is the top response in almost all world regions. The second most popular choice is “Nationality” (22%). Religion (9%) is in fourth place. The East Asia & Pacific region is the only region where “Nationality” is the most popular response to this question. The findings also reveal that identifying as a global citizen is something that increases with age. Globally, among the youngest respondents (18 – 21), “Nationality” is the dominant way of self-identifying; with “global citizen” as a close second place.

Consistent with the sense of unity that young people demonstrated throughout the results, the dominant sentiment towards refugees is empathy with 68% responding this way. The findings show that empathy grows with age. The findings also reveal that as many as 73% of young people would welcome refugees to their countries and 22% would accept refugees into their homes. The full report shows an interesting comparison between the responses to refugees in the USA and the global responses.

Youth embrace technology, but with caution

An overwhelming majority of young people believe that technology is creating jobs (86%) as opposed to destroying jobs (14%). They believe that the next big trends in technology will be Artificial Intelligence/Robotics and the Internet of Things and that the industry sectors that would benefit the most from technology are: Education and Healthcare. They believe that the parts of their lives that will be most affected by technology will be Jobs/Career (65%) and Education (55%), followed by Travelling/Mobility (42%). However privacy and the protection of personal data are a concern for young people with 73% saying that they have avoided downloading certain apps out of concern for privacy. This concern for digital privacy is most pronounced in East Asia and the Pacific region.

And as uncovered in last year’s Global Shapers Annual Survey, young people say that the laptop / personal computer remains the dominant device to access the internet for reading/writing emails (63%) and for online shopping (52%). The smartphone is dominant for social media (82%).

What do young people expect from governments and the private sector?

The most important expectation that young people have of the leaders of their country is: Action-Orientation & Results (selected by 42% of respondents) followed by Integrity, honesty & humility (41%) and then to understand and serve citizens (34%). When asked about what frustrates them the most about their government, Corruption / Abuse of Power is the definitive majority response with 58% of respondents selecting this option. This is followed by Bureaucracy (30%) and Lack of Accountability (29%) in second and third place. A Lack of Honesty & Sincerity is a noteworthy fourth, especially as it rises into the top 3 in several regions.

Interestingly, the findings show that the top response from young people was that jobs in government are attractive. And when asked about recommendations for governments to demonstrate transparency and accountability: young people called for visible penalties for poor governance by officials (44%). This is followed by a call for the independence of the courts (38%) and more regular and open dialogue with citizens (33%). Young people also state clear recommendations for government on what to do with refugees: 54% of young people believe that Governments should focus on integrating refugees into the national workforce, followed by applying selective migration (33%). Only 4% believe that governments should Expel / Deport refugees.

According to young people, the biggest contribution that the private sector makes to society is job creation (36%) and economic development / attracting foreign investment (20%). 54% of young respondents agree or strongly agree that multinationals are good for their country; this finding is the same is all world regions without exception. And when it comes to their own careers, young people are looking for jobs that provide a fair salary (54%), growth / career advancement (45%) and a sense of purpose (36%). Over 50% are optimistic or very optimistic about their job prospects and the full report reveals characteristics that young people appreciate in their managers and their colleagues. The report includes insights about young people’s views on the role of the private sector and ways to improve the workplace.

On Values: Youth reiterate a sense of unity as well as caution with technology

When asked, what is missing in your country to make you feel more free, the top response (49%) is Equal Access to opportunities for everyone (healthcare, education, jobs, etc.) reiterating this sense of unity that young people express across the findings in the Shapers Survey. In a similar vein, globally 65% agree or strongly agree that couples of the same sex should be able to marry each other legally. 22% disagree or strongly disagree. Interestingly this support increases as national income levels increase (World Bank categories). Only in Africa and MENA does the majority disagree or strongly disagree.

On average over 50% of young people are very comfortable with a woman leader as their Direct Manager or the CEO of their organisation or the President of their country. This is the answer choice that represents absolutely no discomfort with women leaders. On the other hand, a significant proportion, also just under 50% have some discomfort with women leaders; with highest level of discomfort limited to about 5% of respondents. Perhaps most surprisingly of all: young men and women have the same levels of comfort and discomfort about female superiors.

And 62% of young people reject the notion of scientifically designed babies while 26% state that it is acceptable. And when asked if they would support rights for humanoid robots, the top response was that they would not support this (48%), with a significant proportion undecided (31%).

Africa is the most empathetic region in the world with refugees with 69% selecting this option. And 12% believe that Refugees are a gift to a nation. When asked about what frustrates them the most about their government: Lack of Accountability is the top choice, followed by Salaries and Benefits and Insincerity and Dishonesty.

Eurasia: In the ranking of global challenges, Eurasia was most concerned about large scale conflicts and wars ahead of Climate Change and Religious Conflict. On the top challenges in my country, the Eurasia region ranks “Lack of Political Freedom” in third place, higher than any other region. Displeasure with Education is strongest in Eurasia with 80% of respondents indicating that the education system does not meet the needs of a competitive economy. And zero percent of respondents indicate that they strongly believe that the current education system meets the needs; this does not appear in any other region.

Europe is consistent with the global trend of support for multinational companies, however Europe stands out with the highest disapproval ratings with 22% disagreeing or strongly disagreeing that multinationals are good for their country. Europe has the highest proportion of respondents who do not expect a violent conflict in their country in the next 5 years (33%). The overwhelming sentiment in Europe towards refugees is empathy with 59%.

Latin America stands out with the highest vote for the most important popular thing that young people expect of their leaders: To Act with Honesty and Integrity. This is followed by To be Action-Oriented and then To Understand Citizens and serve them better. Latin America is the only region where poverty is rated among the top two global challenges, coming after Climate Change. Displeasure with Education is very high in Latin America with 75% indicating that the education system does not meet the needs of a competitive economy.

The MENA region ranks large scale conflicts and wars as the top global challenge, followed by religious conflicts. Climate Change which is the top concern when all regions are combined is ranked third in MENA. On the question of potential sources of violent conflict in the next 5 years, the MENA region rates Foreign Intervention and Poverty as the top two responses.

South Asia is the only region is the world to express that religion is the most likely source of conflict in the next 5 years. Religion was by far the most popular choice followed by Political Differences and Resources. At the country level, South Asia rates Education as the second most important challenge, only after Corruption / Government Accountability.

The Global Shapers Community is a network of local communities developed and led by young people who are exceptional in their potential, their achievements and their drive to make a contribution to their communities. It is an initiative of the World Economic Forum.

For more information about the Shapers Survey: shaperssurvey@weforum.org

For more information about the Global Shapers Community, visit www.globalshapers.org and our videos on who we are, what we do and our vision

Become a Global Shaper at http://www.globalshapers.org/apply

The Global Shapers Community is an initiative of the World Economic Forum.